Someone who still doesn't recognize fascism or tyranny should be returned to his homeland so he can be reminded what it looks like. 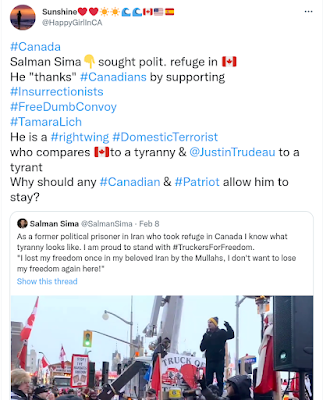 Dude wouldn't have DARED to talk like that in Iran. I've noticed this is a recurring tactic of fascists: Say, with impunity, lots of things that would get them jailed in a dictatorship (and maybe tortured), and simultaneously call the place a dictatorship.

For extra credit, they often deliberately violate the law in a way which would get them punished no matter where they were, but fairly mildly because it's not a dictatorship, and then claim it is because of their speech, which it bloody well isn't.