The level of stupidity is breathtaking.

It is so tiring to realize that people this moronic even exist: 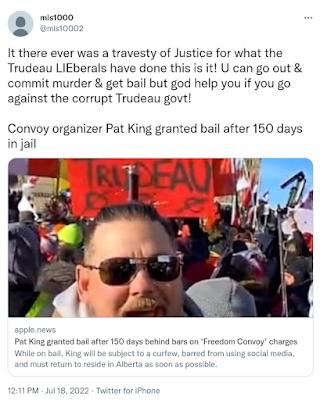 So according to this Twitter twit, if you murder someone, you get bail, but if you go against the government...you get bail? Am I reading that right? Or are they suggesting Pat King killed someone? I'm trying to figure out what the so-called "travesty of Justice" is here. Maybe the problem is I'm thinking too much. That Twitter post probably makes more sense to someone who failed nursery school...TWICE!

How long until the miscreant breaks one of his release conditions?

Not only do people that moronic exist, but they VOTE. They also like to parade about, sharing their opinions with everyone around them, whether those people want to hear it or not.