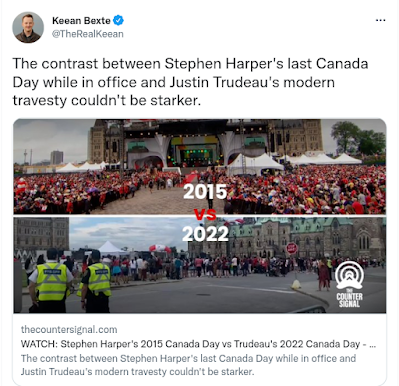 Yes Keean, the contrast between the two pictures IS quite stark.

The 2015 photo shows Canada Day celebrations that were held on the grounds of Parliament Hill, and probably the last public sighting of Stephen Harper by Canadians who weren't CPC members or those who attended his invite-only campaign stops during that year's election. Bold strategy Cotton. Let's see if it paid off for him. *Looks up 2015 Canadian election results* Oh...darn. What. A. Shame.

The 2022 photo shows the same site occupied by members of the Fuckers' Brigade demonstrating how tyrannical Justin Trudeau is by...protesting freely on Parliament Hill about how they're all being cancelled or something. Meanwhile, the actual Canada Day celebrations happened not too far from there in the LeBreton Flats area, where attendance probably wasn't unlike 2015...but then I'm sure the Ginger Nazi already knows that.