UPDATE, 2:30 PM, immediately after initial hearing: Since all that happened was some scheduling, can someone -- for the love of Mutt -- send the Crown a link to this piece, which makes it thigh-suckingly clear that Sheila knew all about the publication ban and even tweeted about it a mere 10 minutes before she so assholishly violated it? How in the hell can she possibly have a defense for this? "I'm sorry, Your Honour, I'm kind of a dumbass." Give me a fucking break. 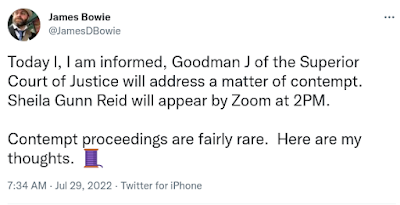 Read the whole thread here. Gunn Reid really is one of the stupidest human beings on the planet. She makes Chris Selley look positively intellectual.

BONUS TRACK: One can only hope Gunn Reid tries to plead ignorance, given how many times she's tweeted about that exact publication ban: 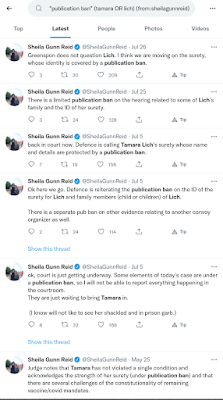 P.S. Can someone bring the above to the attention of the judge or Crown, just in case Sheila tries her wide-eyed, "Garsh, I'm just a poor little country girl, I had no idea!" bullshit?
HOLY SHIT, THIS GETS SO MUCH FUNNIER: Here's human garbage Sheila Gunn Reid, tweeting about the publication ban on the surety:

Note the timestamp: 2:58 PM, July 26. And when did Sheila commit contempt of court? 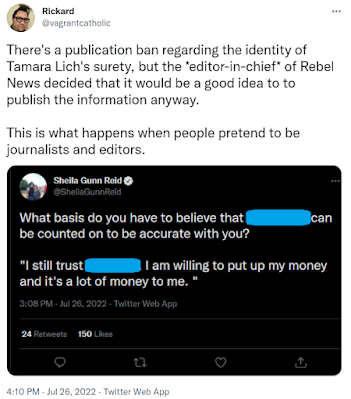 Interesting. The Rebel have lost two of their primary faux-martyr revenue generators in the last two weeks - Pawloswki and Lich. They're very useful to Ezra when locked away in durance vile, weeping about the injustice of it all - that still seems to keep the shekels flowing. But now that they're both released, they're useless as revenue generators.
Perhaps Sheila drew the short straw, and is preparing to climb up on the cross for a stint?

Any bets on whether Sheila's legal defense is being paid for with tax-deductible Democracy Fund donations?

Or the Rebel's marketing budget...

If someone's sending a note to the Crown, it might be worth mentioning Sheila and the Rebel's repeated violations of the Election Act, repeating exactly the same stunt after being given a break? (I'm referring to their deployment of political lawn signs and billboards disguised as advertisements for their "books" during election campaigns, without registering as third party advertisers).

Has anyone asked boy lawyer Patrick Ross for his legal analysis on this? I think we need to hear what the truly ignorant think.

Patrick is back to harrassing "the three bitches" lmao.

I think "the three bitches" should make a call to the Office Of The Superintendent of Bankruptcy, or what we readers of the Canadian Cynic blog abbreviate as "OSB" and let them know that Patrick Ross is hanging out in Lloydminster. I wonder if they will send an RCMP officer to his house to take him in for formal questioning, re: his bankruptcy & dodging his legal obligations?