As I mentioned yesterday, one Peter Skinner of Edmonton has apparently had quite enough of the worthless, meritless, vexatious legal machinations of Lloydminster's Patrick Ross, and has given Patrick until end of Grande Prairie courthouse business today to withdraw said idiotic, asinine and unfounded defamation action against Skinner: 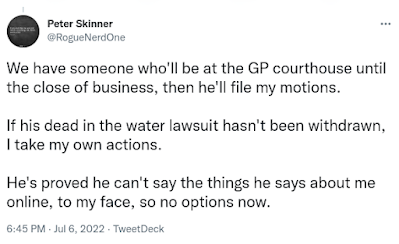 As you can read above, if Patrick refuses to withdraw his utterly valueless action within the next several hours, then shit is gonna happen, and it will all fall on Patrick.
In unrelated news, I have already mentioned that I have recently discovered the identity of Patrick's employer in Clairmont, AB, the Saskatchewan sheriffs have been handed all of this information, and various legal documents are winging their way in Patrick's employer's direction.
Patrick Ross has been given, literally, years to stop acting like a petulant, childish, vindictive asshat, and he's passed on every opportunity. Now he's going to find out what it's like when the grown-ups have had enough of his crap.
BONUS TRACK: Next month, it will be a full year since I got a ruling registering my 2010 judgment in the province of Saskatchewan:

All of the money I have so far seized from Patrick (several thousand dollars) has not made a dent in that amount as all that money went to paying long-standing cost awards and other stuff. And there is one other point.
As Patrick is clearly employed at the moment, but the latest attempt at cleaning out Patrick's known bank account came up empty, there is speculation that Patrick has either opened another bank account to conceal his income, or has possibly arranged for his income to be deposited in the bank account of his father (again, to hide it from collection proceedings).
If Patrick has done either of the above, I will discover that in short order once his employer gets pulled into this morass. And if this speculation turns out to be true, then Canada's Office of the Superintendent of Bankruptcy will assuredly want to have a chat with Patrick, but they will have to take a number behind the Saskatchewan sheriffs.
Tick tick tick ...
Posted by CC at 6:19 AM

How did you figure out where Twatsy works?

Yes, as we speak, Patrick has 9 hours remaining. If I haven't received confirmation he's withdrawn his suit, then I'm going to make his world crumble.

Yes, I could've just phoned and asked, but just picture his face when he's told to come to the office and I'm standing there. He's only told everyone and their dog he can kick my ass but do everything including faking a trip to Edmonton just so he could grab a steak.

The shitty thing for Patrick? I met a woman up there and I'll be going back up when she returns to town. He can run only so far.

On top of what @RogueNerdOne just wrote, I will -- by end of day -- be sending an email to Canada's Office of the Superintendent of Bankruptcy (OSB) identifying Patrick's current employer, as the OSB still very much wants to have a chat with Patrick about his negligence regarding his obligations.

As just one example, even though Patrick no longer has a trustee and is no longer protected by bankruptcy's stay of proceedings, he is still technically a bankrupt and, as such, is legally *required* to honour his obligations under the bankrupcty regime, one in particular being filing an annual report detailing his employment, finances, after-acquired assets and so on. (Under oath as well.)

As I understand it, he has not done so for a number of years, and the OSB would like Patrick to resolve that oversight. And now they will know where to find him.

How much trouble could Twatrick be in if it turns out there was subterfuge with bank accounts? Presumably, FluidPro's HR/payroll will be forthcoming with any and all investigators.

Well … you know where he works … today.

By tomorrow, he could be gone - especially if the employer figures out how much of a PITA employing this guy is going to turn into.

ALL: Legally, having one's wages garnished should not be grounds for firing someone. But as more than one person has pointed out, this is Alberta, where it would be trivial to fabricate some excuse for kicking someone to the curb -- say, he was late two days in a row, or he talked back to a supervisor, that sort of thing. And I was in fact warned that, if I choose to go after Patrick's wages, it could end up with him being canned and me not having any income to garnish.

Well, so be it. I've given Patrick countless opportunities over the years to act like a grown-up and engage with me in good faith to resolve this, and he has inevitably responded by acting like a child, and bragging about how clever he is to keep dodging me, etc, etc, etc. So if he insists on doing everything he can to avoid paying me what he owes me, I will go after his wages even if it results in his being unemployable.

I won't waste anyone's time explaining yet again how many chances Patrick has had to put this behind him, get out of bankruptcy and get on with his sorry excuse for a life. However, rather than do the grown-up thing, Patrick chose to play games, and now we see where that got him.

Patrick can bitch and moan about his lot in life all he wants, but the fact that his life is a train wreck is a situation entirely of his own making.

Paddy deserves everything he has coming. I had one idiotic twitter encounter with the lil guy where he decided I was a pedophile because he had sexual thoughts when looking at a picture of young girls from some movie.

The funny thing is he thinks he's smarter than everyone.

You're assuming that Patrick cashes his cheques at a bank. I would think he uses the many
cheque cashing places that are sprouting up all over, and they play by different rules than banks.

Anon @ 3:56: Once the garnishment order takes effect, it won't matter as his employer will be legally required to send a substantial portion of Patrick's paycheque directly to me. He will not have the opportunity to play games with that.

What if Patrick just quits, so that there's nothing to garnish?

Anon @ 4:37 PM: Patrick always has the right to quit his job out of pure spite to keep me from garnishing his wages, but that's kind of cutting off your nose to spite your face, and it presents a couple more problems for Patrick.

First, if he simply quits without cause, it's quite possible he will not be eligible for EI.

More importantly, I've barely begun putting the legal pressure on Patrick to disclose his finances and assets over the last several years, so if he's been concealing income or assets, my garnishing his wages will be the least of his worries.

I've said this before, but Patrick has had numerous opportunities over the years to act like an adult and take responsibility for his actions, and he's never done that. Everything that happens to him from here forward is purely and exclusively the result of his own really bad choices.