CREDIT WHERE CREDIT IS DUE? Given that Twitter has suddenly exploded with the same information I published early this morning, I suppose it's asking a bit much for people to credit where they learned it all. Am I allowed to be a bit pissed as to how everyone has just discovered all of this when I posted it at 4 a.m. this morning? Le *sigh* ...
TUPOC director William Komer denies any connection, association or affiliation with the vulgar, racist neo-Nazis, bigots and white supremacists of the "Freedom Convoy" movement: 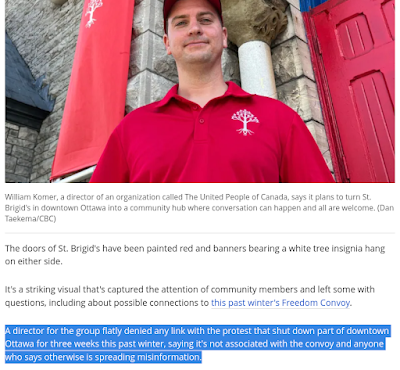 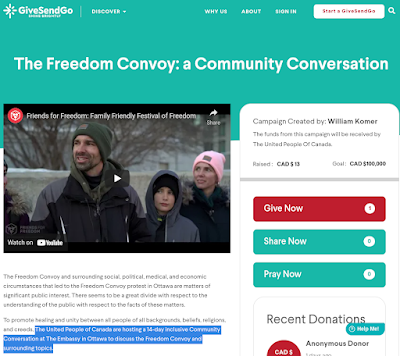 Thanks for stopping by.
(Wag of the tail to anonymous commenter in earlier post.)
THE GORGE ALSO RISES: At the bottom of that GiveSendGo page is a link to a 2-minute YouTube extolling the magnificence and humanitarianism of the Freedom Convoy siege and occupation of Ottawa. It is one of the most pandering and nauseating snippets of video you've ever seen.
JUST TO BE CLEAR: Make sure you understand what's about to go down here. Having assured everyone that TUPOC has nothing to do with the "Freedom Convoy" in any way, the bottom of that GiveSendGo page makes it nad-grindingly clear that this is exactly what TUPOC is all about, advertising a full two weeks of Convoy-pimping propaganda with guest speakers:

This is, in fact, precisely what numerous people warned about from the beginning -- that the purchase of the Church was nothing more than establishing a local base of operations for further Convoy mischief and lawbreaking.
We told you so.
HOLY. FUCKING. SHIT. TUPOC is running at least one other GiveSendGo fundraiser, this one allegedly in support of indigenous peoples and truth and reconciliation: 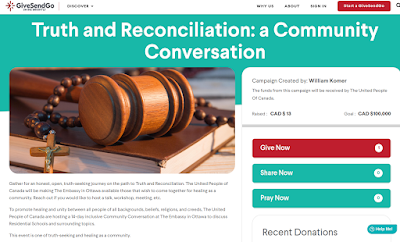 Hilariously, as you can read above:

"The funds from this campaign will be received by The United People Of Canada."

How many other grifts are these slimebags running? Words fail me.
P.S. TUPOC fundraising off of the decades of suffering of Canada's indigenous population is particularly galling given that "Freedom Convoy" supporters were publicly told to, well, fuck off and not insert themselves into the Pope's visit: 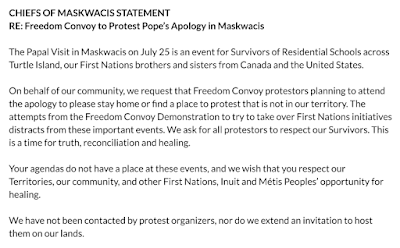 I thought those yahoos had already retained counsel and were threatening to sue anyone who claimed they had anything to do with the convoy. And their first community involvement is to schedule a 14-day discussion defending the convoy? I'm sure their lawyers are thrilled.

If TUPOC is serious about this being an "open and accessible Community Conversation", then local community leaders who want to talk about how damaging and costly that occupation and harassment was to the city and its citizens should apply to be speakers, and see how open and accessible this really is. Where does one register?

Isn't there a multimillion dollar lawsuit against the convoy by the city of Ottawa for all the financial damage they caused? So how the fuck can they suddenly come up with $6M to buy a church? How is this not money laundering?

First, if these people have $6M to buy that property, why are they asking for donations to put on this "community conversation"? Why are they bragging about how much good they're doing for the community if they're asking the community to pay for it?

But worse is their shopping list that includes "fencing and security". So they really are turning a church into a high-security, right-wing base of operations after all. At least they're being up-front about it. I can't wait for the searchlights and razor wire. And all the trucks with tinted windows and "Fuck Trudeau" flags.

They're soliciting funds for a “Community Conversation on Residential Schools.” They have confirmed that they’re doing this without consulting with ANY Indigenous organizations or residential school survivors.

The funds they raise will be used for capital improvements and renovations to the building you just bought. None is earmarked to actually support Indigenous community groups or individuals struggling with recovery from this inter-generational trauma; any excess will be used for causes like repairing their pipe organ.

They're not going to provide any of the structure, facilitation, on-site support or follow up that anybody with the most basic knowledge of the issue knows is absolutely necessary; in other words, they're taking no responsibility for the impact this can have on survivors. Their position is; we're providing the space. It's up to the community how they want to structure and manage any such event. We're just using the words "Residential Schools" because it's a cool topic, and distracts people from the fact that we're actually talking to the real users, the Freedom folks, about how to slide them into downtown Ottawa without too many folks getting pissed off.

I have to say that’s as cynical an exploitation of Indigenous trauma as I’ve ever seen.

I love that givesendgo allows "prayers" to be sent to fundraiser organizers. We should all pray that the funds received will go directly to Indigenous organizations.

""Oh Lord, I really have to wonder why, omnipotent and omniscient as you are, you still require my name and email address in order to accept this prayer. Could it be that the United People of Canada are simply using your name to compile a list of contacts for fundraising, marketing and promotional purposes? Surely they have not forgotten your views on people who profaned what was once a House of God by turning it into a den of thieves?"

The question was asked if they were connected to the convoy. Despite clear evidence to the contrary, they said they were not.

As their photos taken at the Canada Day rally events, they appear to be ardent anti-vax and anti-mask supporters. This question has not been asked on their FB page as yet.
One has to wonder if that too will be denied. And the peripheral related question: Given that we are in the midst of a seventh wave of Covid, and hospitals are overwhelmed, have they taken measures to protect the public who visit their "embassy"?

And speaking of "embassy", that would imply they have a government. Are they indeed viewing themselves as another level of government? Would that be a "people's" government? It takes some talented ignorance and gall to ignore that rather large group of people currently elected by Canadians who officially, and legally, represent citizens of this actual nation.

Questions, lots of questions leading to more questions and few answers. Why would anyone be concerned? /s

Sometimes I lament that I have, you know, morals that prevent me from just skimming money off of fascists. Seems way easier than actually working for a living.