If you pay any attention to the hate-filled rantings of Rebel News' Sheila Gunn Reid, you've probably noticed her literary tic by now; that is, everything is "shocking", "horrifying", "appalling", "crazy", "insane" ... well, you get the idea. Given that Gunn Reid has absolutely nothing of any significance to say that would register with the general public as even minimally newsworthy, she is literally required to explain to her readers that they have an obligation to be shocked, horrified, appalled ... etc, etc, etc.

As the perfect example, here is Gunn Reid recently yanking her panties over something quite mundane and unexciting:

As regular readers may recall, Rebel News was fined a total of $3,000 for violating election advertising law by not registering as a third-party advertiser, as required by law. And here's the thing -- whether you agree with that ruling or not, it's safe to say there is nothing about it that stands out as particularly newsworthy. Perhaps it was a fair ruling, perhaps not, and maybe there are arguments to be made on either side, but it was a defensible interpretation of the law, Rebel News was fined, and that was that.

Utterly predictably, Gunn Reid practically creamed her Pastor Art Underoos in outrage, screaming savagely and biting the head off a live Muslim about how this was "crazy" and "almost hard to believe," despite it being neither of the above, all of which goes depressingly to the intellectual acumen of her loyal followers, who are so intellectually stunted that they must actually be told when to be angry about something.

Quite simply, everything emanating from Rebel News needs to be gussied up that way. Really, "shocking" is their favourite word. Behold: 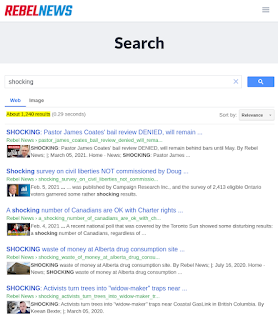 And now that you know that, you will never read Rebel News the same way again.