One body, one person, one count.


Ken Epps’ oh-so-preciously named “Unborn Victims of Crime Act” aka Bill C-484 is slated for vote in the House of Commons on February 29th – this coming Friday. And as already said, this girl is not gonna stand for it. In the words of Mal Reynolds, I aim to misbehave.

Because despite his warm, fuzzy, paternalistic “I just want to protect pregnant women” comments, Mr. Epps’ bill is nothing but a back door attempt to recriminalize abortion by granting personhood to a fetus.

3. The Act is amended by adding the following after section 238:
238.1 (1) Every person who, directly or indirectly, causes the death of a child during birth or at any stage of development before birth while committing or attempting to commit an offence against the mother of the child, who the person knows or ought to know is pregnant,
(a) is guilty of an indictable offence and liable to imprisonment for life and to a minimum punishment of imprisonment for a term of 10 years if the person
(i) means to cause the child’s death, or
(ii) means to cause injury to the child or mother that the person knows is likely to cause the child’s death, and is reckless as to whether death ensues or not;

The fact that a fetus is not considered a child under Canadian law until it exits the mother’s birth canal seems to be completely irrelevant to Mr. Epps as shown in Sub-Section (5):

(5) It is not a defence to a charge under this section that the child is not a human being.

After reading his entire piece of anti-choice legislation, I have one simple question for Mr. Epps: Why?

Why is it that a murdered woman only gets local news coverage but a murdered pregnant woman gets the national and cable news channels humping the story? Why is her death somehow more horrifying only because of the fetus she carries? Why is her life only worth so much outrage to people like him but the so-called “murder” of her fetus is worth exponentially more? Who decides these weights and measures and where and when to apply them?

When, exactly, did a woman become only the contents of her womb? She is a fully formed life, a person who is known and loved by those around her. When this woman dies violently, long before her time, she’s missed for who she was and who she could be ... not for the fetus she carries. Why isn’t that important enough? Why aren’t women important enough? Answer me that, you anti-choice misogynist.

And furthermore. A perfect pictorial representation of how the average Conservative views women. 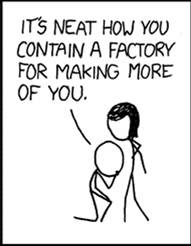 The fetus is not more important than the mother because the mother is always a woman.

Because at some point, any fetus and mother situation comes down to a life and death situation where one lives and one dies. They choose the one that can be most easily and certainly made into an asset for them.

They say "innocent unborn child" when they really mean "unimprinted mind that can be indoctrinated as they see fit". Said virgin mind comes complete with an enslaved incubator and feeder.

I wonder if SUZANNE will show up to tell us once and for all, does she or does she not condone or support the murder of doctors?

#1. I think it would fit better if the cartoon said "It's neat how you contain a factory for making more of ME"....

#2. No man, conservative or otherwise has ever been open to the idea of making more of Sheena. One of those prescient forward-thinking protection of the gender innate gut instincts, I figger...

I can see your point about the caption but I thought it worked quite well with the whole "a woman is just the sum of her womb" point of my post.

#2. No man, conservative or otherwise has ever been open to the idea of making more of Sheena.

Obviously they know their limits ... the big babies.

On strictly legal principles, this proposed legislation would fail completely were it ever to be subjected to scrutiny by the SCOC. That is, of course, presuming that it even makes it through the Senate, which is also a highly unlikely proposition. It's nothing more than shameless posturing to score some cheap political points with the SoCon constituency. Another completely futile gesture that will generate a lot of sound and fury (and drum up piles of contributions in the process), but little else.

I think they hope it will somehow be passed, then after they stack the SCOC, they can get the abortion exception struck down, leaving the rest of the law intact and thereby outlawing abortion from conception on.

LuLu:
"beings who cannot see themselves as entities with a future cannot have any preferences about their own future existence."
-Peter Singer

I am no prolifer but the casual view of human life we have come to is sick and sad.

"Why is it that a murdered woman only gets local news coverage but a murdered pregnant woman gets the national and cable news channels humping the story? Why is her death somehow more horrifying only because of the fetus she carries?"

You mean like the 30-40,000 people (mostly children) who die each and every day around the world of starvation and disease? If one newspaper story was written up for each child that died in the third-world it would take a century just to account for a single day’s worth. Lost potential indeed.

But that's different! Most of them aren't white.

Congratulations, Wayne .. I didn't think it was physically possible for you to be even more of a despicable asshole than you already were.

And yet, you continue to surprise.

But the woman, of course, is expendable. Thanks for proving my point, Wayne, as only a Blogging Tory can ...

Perception is perception of reality.

Yes RT, and the millions of deaths due too NOT Spraying DDT, based on bad science.

No LuLu, the woman is not expendable just perceived to be.

A casual view of human life.

Perception is perception of reality.
Too bad you don't have that.


the millions of deaths due too NOT Spraying DDT, based on bad science.
Yes, it is bad science to claim that NOT spraying DDT is causing more deaths. Just google "DDT canard". It is in fact still allowed for malarial areas. What was outlawed was the mass spraying that actually resulted in the mosquitos becoming resistant.
Nice try though.

No LuLu, the woman is not expendable just perceived to be.
Exactly. You would choose the single cell over the woman.

A casual view of human life.
Glad to see you admit to it. The difference of course is that I think killing before a certain stage of development (pre birth) is better than killing at any stage of life solely because of how someone has developed (female, liberal, wrong colour).

I am what I am
Sure popeye. Arf arf arf.

Mass spraying with a rotation of different insecticides including DDT would work, along with nets etc.

"Exactly. You would choose the single cell over the woman."

I would do everything to save both, then the mother then the multi celled viable fetus.

I think killing is something that we humans excel at. Hell, the only thing we do better is screw.

Here's an idea. Instead of protecting the fetus, let's do something about protecting WOMEN! Jesus H. Christ on a pogo stick. The fact is that the leading cause of death in pregnant women is murder. That women are beaten more during pregnancy than any other time. So why in the hell not make pregnant women a protected class? Make the punishment for assaulting or murdering a pregnant woman to be harsher than usual. That would satisfy those who truly do want to see punishment for the death of a fetus *and* do something good for women (as opposed to fucking us over once again). Win Win. Except of course that this fucking bill has dick divided by squat to do with protecting anything except the right wing's desire to tell women what they can and cannot do with their own bodies.