Just because I damned well feel like it, that's why.


And given that I'm in a touchy mood today, I just feel like taking a Canadian, right-wing dumb shit and holding him up to let the entire world see how unspeakably, motherfucking stupid he is.

In his comment back here, one Patrick Ross (the proprietor of the hilariously appropriately named "Nexus of Assholery" blog), takes issue with the photo of the arrest of the Montebello provocateurs thusly:

This would have been the photographic evidence he was addressing: 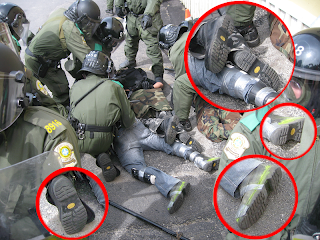 Do I really have to explain the dumbfuckitude?

By "they", Mr. Ross is obviously referring to the yellow "triangles". So let's take a close look at the boots that earlier commenter Mr. Moore was referring to, given the URL he provided:

Now let's compare the sole of that boot to those in the earlier pic. Hmmmmmm ... same heel pattern, same sole pattern ... really, the same boot. The only difference? The 8-sided Vibram label is black, not yellow. Well, that certainly clinches it for me!

After all, it's just unthinkable that Vibram might make a boot specifically targeted at the "fire/police" market, and perhaps make some with a black brand label and some with a yellow one. And, by all means, ignore the fact that the rest of the sole is absolutely, 100% identical.

I think I'm going to start a new blog entitled "Why Patrick Ross is a jackass." I will never want for material.

YOU'RE NOT GOING TO BELIEVE THIS. Seriously (scroll to the bottom):

... the yellow markings on the bottom of the suspects' boots really do look more like triangles. Also, a closer examination of the photograph makes the treads ont the boots appear very different from that of the police officers, as the suspects' boots don't appear to have the circular treads on the pad of the shoe, although this could be due to poor image inhancement on the enlarged portions of the photograph.

Yes, Patrick, you're right -- those yellow things on the soles of their boots really do look more like triangles: 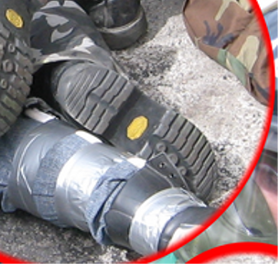 and the boots of the protestors (above) are clearly "very different" from those of the arresting officer (below): 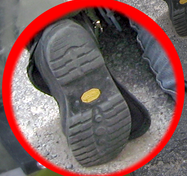 God Almighty, how does one even respond to that?

FREE AT NO EXTRA CHARGE: Red Tory also takes the time to whack the Patrick Ross pinata. In a fair universe, Mr. Ross would be forced to walk around with a blowup of one of these articles on a sandwich board for the rest of his life.

After spending all day salivating over the "conclusive evidence" that CEF president Dave Coles promised on his claims that police officers were trying to provoke riots at the Montebello protests, ...

Really? Salivating all day? Let's see what I actually wrote when I heard about the imminent press conference, shall we?

All I can say is, the CEP better have one powerful case, or they're going to end up looking very, very foolish.

The CEP, Canadian Labour Congress and Council of Canadians President are planning a joint news conference Wednesday to discuss the video.

I'm sorry, but holding a press conference to "discuss the video" is a far cry from "proving" the presence of police provocateurs. I hope that was just a poor choice of words on CTV's part.

If Coles called this conference to do nothing more than summarize all the circumstantial evidence we've been discussing thus far, he's just made a huge mistake.

I'm assuming that the above rossholitude requires no further explanation from me.

Maybe he should rename his blog the Nexus of Dumbfuckitude. Has a nice ring to it.

Still doesn't change the fact that the only visible similarity between the officers' and suspects' boots is a little splotch of yellow which (in the suspects case) still does look like a triangle.

It also appears to be missing the round treads on the pad of the sole.

But don't give up now, boys. I'm pretty sure you're on the verge of proving aliens crashlanded at Roswell, too.

Classic PR in action, he is one of those that not even the expression "open mouth change feet" is sufficient to accurately describe just how often he makes a complete fool of homself.

Shorter Patrick Ross: "Who are you going to believe; me or your lying eyes?"

I actually believe that this story might have some factual basis. If it is true and I suspect it is, and it was not the boots that make me suspect so, but the gloves and they type they were wearing and how they were being worn, the cuff rolled down. The fact they were undercover in the crowd really doesn't bother me, that is just good police work, it is the fact that they might of been provoking the crowd. From what I can see on U tube video they with a bunch of peaceful family protesters so that has me concerned. I wish there was more footage of what they were actually doing before the union leader starting outing them.

At the risk of sounding indelicate, Holy Fuck. Is there any chance that Patrick actually believes what he is saying? Because if he does, none of this is really a fair contest.

Okay, how about "SphincterHub"? Unless it's taken.

Okay, I checked, it's available.

I hate to say this, guys, but Patrick's right. That's clearly an eight-sided triangle on the "protester's" boot, while the officer's boot has an octagon.

You wanna mudwrestle me for him again, don't you? It just never ends.

Everytime I'm about to abandon the idea of eugenics, along comes a patrick. Someone pissed in the gene pool.

Do you, um, actually know the definition of "triangle," son??

Please look it up in the dictionary. You won't find the word "eight" anywhere.

There's an old Internet axiom that no matter how much your writing drips with sarcasm, somebody will miss it...