Commies and Muslims, oh my.

Alright. CC is going on vacation and a richly deserved one at that. Few bloggers are able to maintain the pace that he has established here. So while CC recharges his batteries I will attempt to keep the posts coming as best I can. In CC's honour it only seems right that we give serial dimwit Joel Johanessen a swift kick.

To be honest I don't read poor Joel's musings for the same reason I don't drink out of the toilet, it's intellectually unsanitary. I'll soil my synapses this once, as tribute or penance, you decide. Today Joel is all atwitter about a meeting of Marxists as reported in the Post. With a title like "Canada’s commies, um, and Muslims, and um others, gather in Toronto" you can be assured of, um, quality analysis.

From the top, "Some people—especially liberals—think I’m Joel the blogger A.K.A: Captain Hyperbole, or Joel McCarthy; but actually, I’m just way ahead of you.  Or on to you.  And I call it the way it is.
Almost as if to help prove me right, which they do almost every day, the Marxists of Canada—um, and Muslims and Kyoto bible-thumpers—gather in Toronto this weekend for the four-day Marxist “Festival of Resistance”.

Indeed, what all of the literate folk see as Joel's chittering idiocy is just proof that he's, um, on to us. On to us like the politically deceased Rick Santorum on a puppy. I'm not sure quite what Joel believes is being proved by a meeting of politically disenfranchised fringe types. Given Joel's strangled prose, I doubt he's sure either. Whatever, he's quite sure that he's almost sure of something and it involves lefties of some sort and Muslims and it must be bad. Onward...

"The National Post is covering the story, although they serve to mainstream it more than properly marginalizing the radical communists as they should any group of fringe leftist radicals and agitators who call President Bush a “terrorist”, see below, —and like the liberal media so often does to those awful “Christians”, for example, unfortunately: Participants are totally mainstream liberals, seems to me, as judged by this t-shirt ..." 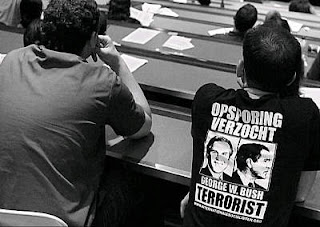 Well, if a t-shirt is all the evidence one needs to define 'totally mainstream liberals', it explains Joel's execrable language skills. All of that reading is just a waste of time. T-shirt - case closed. Joel follows this, which is the full extent of his analysis with a couple of paragraphs from the Post article with a few highlighted phrases that point out the enemies:

“Out of Afghanistan and into Kyoto.”

And that's it. That's the sum total of what Joel derived from the article. Followed by a snap of some literature with the following remark,

"Betcha they take VISA and MasterCard and American Express at their li’l book stand featuring communism and socialism books, and global warming books, and of course feminism books! And hey: what self-respecting —or good ‘n self-loathing— liberal or member of Layton’s you’ve got to be kidding party hasn’t read Noam Chomsky’s fabulous writings?"

Cripes why read Chomsky when you can get the crystalline fabulosity of Joel Johanessen for free. Shame that reading thing hasn't infected Joel, he might have made it a little further into the article which is busy almost proving his almost points. Remember how all of us liberals and our dastardly media were always hurting the feelings of the poor benighted Christians? Well one might imagine a bunch of Marxists would be pretty harsh in dealing with the Godly. Or not so much:

"At one point, a self-proclaimed Trotskyite in his 20s stood and for about three minutes declared his "absolute hostility" to all religions. The crowd shouted him down. Several speakers later, Benoit, a 40- year-old from Gatineau who delivered his intervention sitting down, said that when he last read the Communist Manifesto, it did not say, "Atheist Communist workers of the world unite." Minutes later, the Trotskyite slinked out."

And then there was that whole t-shirt as proof of thesis thing, "Not one T-shirt that read "Eat the Rich" could be found anywhere." In all fairness to Joel, reading entire articles is a lot of work. Let's give the last word to Craig Offman, the author of the Post article since Joel doesn't even bother to credit him:

"Inclusiveness is the buzzword here, where the members of this hodge-podge gathering can be overheard calling each other brother and sister. Participants call this membership drive "building unity," a much-repeated mantra throughout the opening night. Self-proclaimed Marxist James Clark, who helped organize the event, said that while there are disparate groups in attendance, they can all still rally around a slogan like "Out of Afghanistan and into Kyoto."
Gatherings like the one this weekend at the University of Toronto are an attempt to get the party restarted. Let's face it: Das Kapital is not selling like hotcakes anymore.
Maps of the world are no longer crowded with country names that begin with expressions such as the People's Republic. Almost all of the movement's Great Leaders are now waxed and tucked away in grand mausoleums. Some socialists are looking at the dissolution of Communism as an opportunity.
"We're looking at a new beginning," said liberal thinker Stanley Aronowitz, Distinguished Professor of sociology at the Graduate Centre of the City University of New York. "We're no longer based on the existence of nation states. We must reinvent ourselves."
None of this sounds very Marxist, does it?"

Nope, doesn't sound very Marxist at all. And here's my bet, Joel, in his highlighting, pointed out the Professor of Sociology. Who'd like to wager that the twit doesn't realize that sociology and socialism aren't the same thing? Joel Johanessen, ladies and gentlemen, still as dumb as a box full of snot.
Posted by Lindsay Stewart at 12:17 AM

Joel really is just the equivalent of some street person screaming incoherently on the corner. I think the only thing the rest of us can do is ignore it and hope our health and social services will, at some point, revisit the thorny issue of institutionalisation.

Joel is not well; that's obvious. I'm always wondering how people as mentally unstable as he seem to be are able to make a living. Maybe he's on long-term disability?

Being half Irish, I'm not exactly a fan of the Birtish royal family, and being an American Vietnam Veteran I've never been into this Iraq thing, since I've never believed getting up every morning to walk into an ambush is the way to win anything, even if an American invasion of a third world dictatorship to prove an AWOl air force officer's cojones is good public policy.

But I have to stand with the British troops in Prince Harry's unit, who have decided to wear tee shirts with a target over their heart's and the legend "I'm Harry." These things are expensive. They want something like 22 lbs. That translates into $47.50 American. See http://www.imharry.com/.

On the one hand, I hoping that CC, being on vacation and all, won't see this momentary moral weakness on my part. On the other hand, wearing these tee shirts is the exact opposite of chicken-hawk, which is a polite way of saying that guys who talk a big stick, while clinging to their draft deferments, are chicken shit. I'm in to that; Igot my "I'm Harry" and I'm looking for a Bush or Cheney event where I can wear it.