The long, slow descent into wingnuttery. 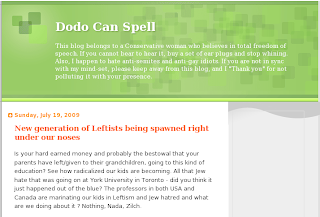 In unrelated news, Barack Obama is a horrible, terrible, no good, very bad man who isn't even an American, whose wife is a reverse racist, whose kids are ghetto trash, and who should, for the good of the U.S., be impeached, driven from office or, at the very least, killed outright.

P.S. Dear truly stupid people: The above is sarcasm. Most folks will understand that. Twatsy won't. That's why he's Twatsy.

Yeah, I was wondering about that too.

Rapid nosedive back into a well-deserved obscurity, more like it.

Put that one on permanent IGNORE methinks.

someone send her link to anarch*re for the full comedy goodness.

that first sentence fragment is a keeper. 'is our children learning' quality stuff that is.

Her leper hatred is bad enough.

Take the beam out of thine owne eye dodo!

wake me when she says something disgusting again.

then we can ask why Stephen Taylor keeps her around as a representative of hiw views.

Dodo is a whore.

...I just want to see my pseud up on her blog again.

York is hyper-leftie? Guess that explains the thousands of undergrads who marched with CUPE 3903 when they went on strike.

That is what happened, right? Right?

Isn't part 2 of her "investigation" due any second now?

I saw that you were missing Dodo's attention, so I dropped her off a note reminding her of your existence and pointing out you are the perfect example of all that is wrong with Ontario university education, the perfect product of Hegelian dialectics.

She does have some use, though. She reminded me today that Michael Chrichton is still dead.

i hope she doesn't find out about our anti-semitism, too....

I'm more interested in the spawning aspect -- do leftist males really do that in cold water? Why do leftist women put up with that?

Funny you should mention Twatsy. After spending about ten, no make it seven, minutes scrolling through Dodo's blog I realized that she's accomplished the near impossible.

A blog which has even fewer comments than Nexus of Assmulletry.

@Frank:
Dodo is another "free speech" Tory. Meaning "I'll post it if it licks my rosy-sweet tush."

Far as I know, none of my comments ever made it past her intelligence filter.

Which gives me an excuse to ignore the noisy cow.