Over at "Small Dead Brain Stems," Kate and the Katettes put on a good show by pretending to give a crap about Canada's military: 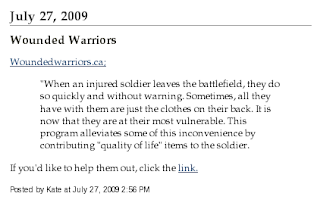 Mercifully, refusing to be swayed by all those bogus crocodile tears, Blogging Tory "Neo Conservative" is sticking to his guns:

before you go all "taliban jack" here... try to remember that, statistically, we have lost less than 20 soldiers per year since 2001.

"nineteen snowmobilers have died in avalanches in B.C. and Alberta just this winter."and if you want a real wakeup call... read a book about world war one... or snakes.

And gunshot victims in Toronto, Neo. You forgot to minimize military deaths by comparing them to violent crime in Toronto. I'm just sayin'.

BONUS TRACK: One can barely wait for Neo himself to start pretending he cares about murder victim Victoria Stafford, given his somewhat less than sympathetic rant from a few months back: 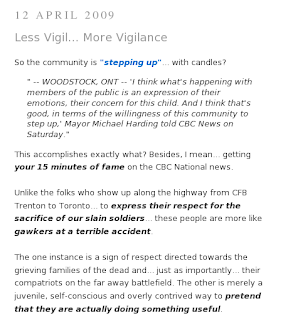 I'm going to take a shot in the dark and guess that Neo is suddenly terribly, terribly awash with grief over this, after having told all of Woodstock to basically quit their boo-hooing, suck it up and stop being such pathetic attention whores over some missing kid.

Stephen Taylor must be so proud. Of what, I have no idea.

Speaking of deaths: over 3000 people are killed in traffic accidents in Canada each year. Over 300 of them are pedestrians.
Health Canada doesn't have much to say about it tho.
And speaking of small dead things, over a million of em are road kills.

Patrick Ross said...
This comment has been removed by a blog administrator.
9:29 PM

Fuck off, Twatsy -- go back to your blog and your man-date, mahmood.

Patrick Ross said...
This comment has been removed by a blog administrator.
2:29 PM

I don't know what you think you're accomplishing here.

You know that I won't stop pointing out to you that your argument here -- that Neo Conservative's objectionable comments regarding the deaths of Canadian soldiers proves that Kate MacMillan doesn't care about Canadian soldiers -- is stupid, and categorically untrue.

You know I just laugh when you delete these comments. How many times will we play this dance out before you learn?

I just wish Audrey could see This. It's interesting that she seems to lack the intellectual honesty to criticize you for the very same kind of argument she claims to abhor.

Then again, I'm not surprised -- at the hypocrisy of either of you. Why would I be?

Wow ... double confirmation that Twatsy condones and encourages the murder of abortion providers. Thanks, Twats. You're being ever so helpful.

And now everyone can see what you're passing off as evidence for that pernicious and false claim -- commentary on entirely unrelated matters.

I think PR needs some new shoes, he's worn the old ones out stamping his feet so much here.

So PR, do you in fact support or condone the murder of abortion doctors?

Despite the inherently dishonest way in which you've conducted yourself vis a vis this question, you know it's been made fully clear that I do not.

This question was answered long, long ago.

Now, ls, here's the question for you:

Do you stand behind Robert Peter John Day in his pernicious and false claims regarding that very topic?

This question was answered long, long ago.
Good. Then you should have no trouble repeating it.

Do you stand behind Robert Peter John Day in his false and pernicious claims that I support the murder of abortion providers?

Still waiting for your unequivocal statement. Until then, anyone is free to make assumptions. And so CC can assume what he wishes.

You've actually made it easier for him with your obfuscation. Nobody has to retract a statement made about someone's views, when that person's views at the time were circuitous, nebulous and difficult to discern. Since you are again avoiding giving a clear statement, you are again enabling CC to say whatever he wishes to assume about your views.

Referring back to politics, it is not unlike people claiming Iggy supports torture, when in fact his writings do not, if you actually read them in their entirety. Since he is not giving unequivocal simple statements on this, one may continue to repeat the lie. Of course he has a different reason; at some point he will pounce with something along the lines of "RTFM" or RTFBook in his case. But he would not be able to claim defamation, since he has not made a clear statement when it comes to his attention that the same lies are again being repeated.

Perhaps you have some gotcha response ready too, but until then, any assumptions about your views can be repeated with impunity due to your lack of any clear statement, despite knowing what is being said.

You see, ls, you know that is not the case.

You yourself have, in the past, acknowledged the numerous comments I have made opposing attacks of any kind on abortion clinic providers.

We all know you're too dishonest to admit to this. No one's surprised by it. It's what makes you scum.

Furthermore, nothing has ever been obfuscated. You know it, and I an prove it.

If you yourself want the opportunity to test your claims in a court of law as a co-defendant with Robert, we very much can arrange that opportunity for you.

You just go ahead and let me know if that's what you want.

*Yawn*. Jesus, Twatsy, could you be any more boring or yappy?

Oh, and how's that deficit coming, Twats? Feel free to lecture everyone here on just how stunningly brilliant you are. We need the amusement value.

You yourself have, in the past, acknowledged the numerous comments I have made opposing attacks of any kind on abortion clinic providers.
No, I accepted an unequivocal statement, free of "go read this" links. You made such a statement some time ago.

We all know you're too dishonest to admit to this. No one's surprised by it. It's what makes you scum.
Good to hear. Since "everyone" thinks I am dishonest, nobody would believe anything I say about you. Therefore, any words of mine about you are not actionable, by definition.

Furthermore, nothing has ever been obfuscated. You know it, and I an prove it.
You regularly responded with "I already told you" or "go read it in my blog", instead of a simple yes or no. You did this about 20 times before finally giving somewhat of a clear answer. But the previous 19 obfuscations don't just disappear. They demonstrate that your viewpoint is not deeply held or fervently defended. That means that someone else's opinion on what your opinion is, is not actionable.

If you yourself want the opportunity to test your claims in a court of law as a co-defendant with Robert, we very much can arrange that opportunity for you.
Spare me the royal "we", your superiorness. You know you're trying to get someone to sue you, to give you a platform on someone else's dime. You would have sued CC by now if you had an actual case. Buy you don't and instead resort to blog trolling.

You just go ahead and let me know if that's what you want.
You just do whatever you see fit. Pretend that my responding to you means whatever you want it to, fool.