Because they're fucking idiots, that's why.


I'm not even going to link to that insufferable twatwaffle anymore, but you know who I'm talking about by now -- the extinct, flightless one -- who crows thusly: 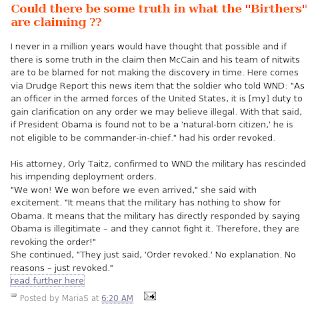 Wow ... we better rush right over to that link at WingNutDaily and see what's shakin':

A U.S. Army Reserve major from Florida scheduled to report for deployment to Afghanistan within days has had his military orders revoked after arguing he should not be required to serve under a president who has not proven his eligibility for office.

His attorney, Orly Taitz, confirmed to WND the military has rescinded his impending deployment orders.

She continued, "They just said, 'Order revoked.' No explanation. No reasons – just revoked."

Really? Is that what happened? I know ... let's check in with someone who's not an astonishingly, pig-ignorant imbecile. Like, oh, this guy:

UPDATE: The Army has revoked the deployment orders for a soldier who said he shouldn't have to go to Afghanistan because (he believes) Barack Obama was never eligible to be president.

And here's the money quote:

Because he's a reserve soldier who volunteered for an active duty tour he can "ask for a revocation of orders up until the day he is scheduled to report for active duty," a public affairs officer explained. Cook volunteered for the tour in May of this year. It is not clear why he did so, considering his current objections.

Wow, imagine that ... the revocation had nothing whatsoever to do with the asinine accusation of Obama's birth certificate, and everything to do with the guaranteed freedom of a reserve soldier to un-volunteer up to the day of departure.

Ladies and gentlemen, your Blogging Tories: Yes, they really are all that fucking stupid.

P.S. You don't need to trust the Huffington Post. Here, here's a slightly different take on it from www.military.com:

U.S. Army Maj. Stefan Frederick Cook, the reserve soldier who says he shouldn't have to go to Afghanistan because he believes Barack Obama was never eligible to be president, has had his deployment orders revoked, Army officials said.

Lt. Col. Maria Quon, a spokeswoman for the U.S. Army Human Resources Command-St. Louis, said Cook was no longer expected to report today to MacDill Air Force Base, Fla., for mobilization to active duty, according to a report in the Columbus Ledger-Enquirer of Georgia.

The paper said Cook, as an Individual Mobilization Augmentee, had volunteered for a year's deployment to Afghanistan on May 8 and his orders were issued June 9. Quon told the paper that IMAs who volunteer may ask for a revocation up until their reporting date, but that Cook had not asked for this. Quon also told the paper she could not say why the Army had revoked his orders, citing the Privacy Act.

And once again, we note that, because Cook is a reservist who volunteered (and, yes, one wonders why he did so in the first place), he has every right to change his mind, and the revocation says nothing about the merits of his idiotic lawsuit.

And that's why you read CC HQ. Because we know shit. And stuff.

OMFG!! This has been a con game from the very beginning. I am so not shocked.

Wow, that's a whole lot of crazy in one short post. Let's hope Dr. Orly Taitz, Esq. goes to jail for ten years. Longer for having contributed to the intellectual discombobulation of numerous people, including it seems, poor Dodo.

I really hope the wingnuts eventually launch class actions suits to nail all the people who've misled them. I'd support that. It's either that or the camps...

So Orly Taitz and Maj Cook conspire to present this a a case for individual who are under orders to be able to refuse to obey the orders if they question Obamam's citizanship?

Maj Cook, reservist, Volunteers for Afganistan, and then refuses to go,...

Jesus, talk about misrepresenting the facts. Well Maj Cook is in the clear, but Orly Taitz may have just hooped herself, given that she is clearly trying disrupt the US military (they have serious laws to deal with kind of shit)

such a fine line between ratcatching and ratfucking....

Oh, no he isn't. One of the reasons that will appear in Cook's CENTCOM file for not being accepted for service will be his conduct. Expect the US Army to, at the very least, Article 15 this guy. I predict a general court-martial.

A reserve officer can request his orders be revoked. That is not a guarantee the command will approve his request. It is rare and only under exceptional circumstances a command would revoke a deployment order. This is a blow across the bow of Obama and his thugs. The second salvo in three days.

"This is a blow across the bow of Obama and his thugs. The second salvo in three days."

and there's nothing you can do about it. sucks to lose like you.