I have no comeback. 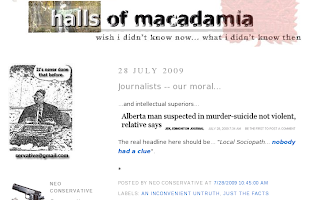 Almost completely off topic - linked only by their relative proximity near the bottom of the intellectual food chain among conservative bloggers - has anyone noted that Richard Evans teen-porn site seems to be inert?

You know, Balb, I had actually successfully not thought of NAMBLA Boy for several straight days, and then you go do that.

If Mrs. Dick has no problem with any of that, who are we to question her choice of self-abusive lifestyle?

It's not just inert. A lot of it has *disappeared.*

TransAlta is asking people to avoid using appliances during the day to avoid brownouts due to a a massive load spike in Calgary. Apparently one of the homes has been running shredders 24/7 since July 3.

Richard has a lot of tracks that now need covering, since he is no longer libeling a pseudonym.