Your suggestions in the comments, if you please. 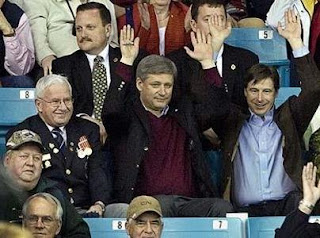 Cpl Benjamin Robinson? Goodness, what a lovely, big Taser you have there.

Say, you wouldn't be looking for a job, would you?

I could use a man with your special skills on my prime minister protection team, know what I mean, jelly bean?

(Damn, you got there first.)

OK, OK, Iggy--you're more conservative than I am. I give up!

"I'm a fat, stupid moron who just shit in his pants."

"On the count of three, I want everybody to do the wave. One, two, three."

(nobody else does it)

"On the count of three, I want everybody to do the wave. One, two, three."

(still nobody does it)

"I'm your prime minister, damn it! Do the wave!"

Raise your hand to vote? I vote twice, and so does my boyfriend. Obviously I am entitled

I hope they've forgotten what I said about the maritimes. Otherwise these guys are going to have use the UZIs.

Raise your hands if you wish you were as popular as Obama, but still are a pathetic failure like Bush.

Hands up, baby, hands up

Everyone who thinks Neo Conservative is an idiot raise your hands,...

vw: rechi. as in "get me a Starbucks dammit, if I have another Timmy's for the cameras I'll rechi"

...Wave your hands in the air like you just don't care.

(and we know exactly just how much he do care)

Zorpheous, in case you didn't see my comment before neo deleted it:


Gee Neo, I thought you said Scott Tribe was Liberal Supporter.
First I've heard that. But I am not Scott Tribe. I comment a lot at CC's, and I have *never* commented there as anyone except "liberal supporter".

You do know how to check an IP log, right.

Jeepers, what a nancy boy
In fairness to neo, I don't show up on sitemeter.

Liberal Support, aaahhhh, I see,... Oh well. I show up and CC shows up in IP Logs. Poor old Neo is just having a melt down right now,... LOL. The frak doesn't even remember it was he who made of the Nonny Mouse handle for me. He is bitching and complaining about his handy work.

I don't know why you bother with him, I only tend to look in on Neo once and awhile. The lives in permanent hate induced rage or anger that he feeds with hatred and fear. The is going to blow on of these days, reminds me a lot of Anonalogue,... in fact it would not surprise me if Neo Conservative was Anonalogue

I don't know why you bother with him
...
he is going to blow on of these days
That is exactly why I bother with him. Think of me as the bomb disposal robot. I want him to explode safely, not go out and shoot a bunch of people.

The only think that I find interesting about him is the same type appeal that people find in watching a slow motion train happen,...

The guy is loonie

If only the Cons would go. Immédiatement.