UPPITYDATE: If you want to truly appreciate how Ezra Levant has learned how to play the system, I suggest a piece I wrote back here. I won't bother summarizing it; you can figure it out for yourself.

As recently reported, Ezra Levant and the rest of the sub-humans at Rebel News are creaming their Preston Manning Underoos over the stunning rise to #1 prominence of this piece of literary dreck from piece of human dreck Derek Smith: 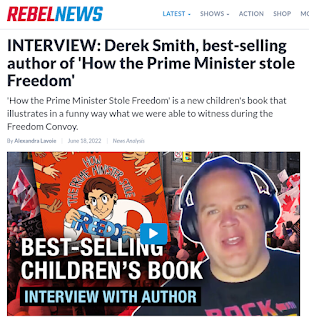 It's not like the folks at Der Rebel haven't figured out how to game the system, as I have explained on occasion here. And here. And here. And here. I mean, when an execrable human being like Sheila Gunn Reid can get a bestseller while being arguably the shittiest writer in the country, well, you know how seriously to take those rankings, as a recent commenter here at CC HQ explains:

I used to wonder how the truly wretched pustules of anti-culture self-published by the Rebel "writers" and their network managed to achieve apparently legitimate "#1 Best Seller At Amazon" status. Andrew Lawton's "insider account" of the trucker's convoy currently boasts that distinction, and it hasn't even been published yet. However, it was explained to me by an editor friend who helps writers prepare their work for self-publication.

How to have a best seller:

This spike in rankings obviously lasts until the next publication enters the category - usually a week or so later. Doesn't matter - the author can still claim a #1 Best Seller.

And now you know how even worthless, untalented human wreckage like Derek Smith or Sheila Gunn Reid can slime their way to a "bestseller."

I remember the time I used a bot to download 5400 copies of Sheila's book from the Rebel website and Ezra claimed it was a best seller. In the end only 5510 copies were downloaded.

That's how fucked Ezra and crew are.