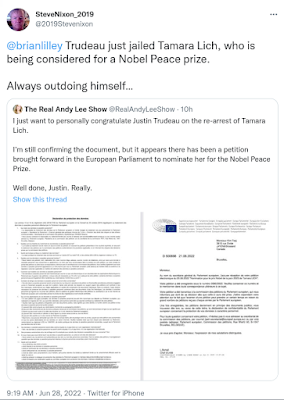 "Any member of parliament worldwide, any professor or associate professor in relevant fields such as the humanities or social sciences, and a number of other individuals"

Did they get the Norway guy that nominated Trump for 2021 to propose this?
Looks like no Parliamentarian in Canada wants her nominated.

Getting past whether the letter supposedly brought forward to the European Parliament is real or not (likely the latter), I don't imagine just anyone can nominate someone for the Nobel Peace Prize. Otherwise we'd have letters written (scrawled?) to the Nobel Committee (most likely in crayon) like below...

Not that it stops someone from doing so anyway, but you know...

Actually, anyone can just nominate anyone for the Nobel Peace Prize. That's just another reason why someone having been nominated for it is not a thing you need to pay attention to.