As part of my ongoing series in bringing folks up to speed on my meticulous preparations for going to trial against Rebel News' Ezra Levant, we're going to cover what was easily one of Ezra's most mendacious and breathtaking falsehoods related to his 2016 Indiegogo fundraiser for Fort McMurray -- his claim that the full "100%" of all donations to his fundraiser would be turned over to the Red Cross. And you should read right to the end since, at the end, I'm giving one lucky reader the chance to earn some actual cash for doing some detective work. For now, to business.
To set the stage, it was back in 2016 that Ezra Levant assured one and all that they should send their donations on behalf of Fort Mac, not to the Red Cross directly, but to him, and he gave the unequivocal and unambiguous assurance that he would subsequently turn over "100%" of those donations, fully and completely, to the Red Cross. I could go on but, once upon a time, I wrote up this incident in excruciating detail, and you can read all of that here:
but make sure you come back here afterwards for your chance to win valuable prizes. I'll wait.
Dum de dum dum ...
OK, so let's recap what (beyond any doubt) happened back in 2016, shall we?
None of the above is even remotely arguable, but here's where the valuable cash prize comes in. Because I am a scrupulously fair man, I have always entertained the possibility that, somewhere, Ezra issued a public retraction and correction of his claim of "100%", and I just never noticed it. Trust me, I've looked, and have never found such a thing, but in the interests of fairness, I am always willing to be corrected so here's the deal:
I will pay the bounty of $100 -- no, let's be generous and make it $250 -- to the first person who can leave in the comments section proof that, at some point during the month of May, 2016, Ezra Levant published an admission that his claim of 100% was, in fact, deceptive and misleading and was based on him bragging about his initial $10,000 "donation", only to take it back and use it as a slush fund to make up for the 5% lost to Indiegogo's processing fee. It's not necessary that Ezra use those words; all it will take to collect the bounty is to point to an admission by Ezra as to what was really happening. (And, unlike Ezra, if someone succeeds, I will actually hand over the money.) As I said, I have looked high, low and askance for such an example and, to this day, have never found one, so if you can produce one, the money is yours.
Finally, as always, if you think it's a good cause to stand up to Ezra Levant and refuse to be intimidated by his never-ending stream of idiotic, meritless, whiny SLAPP suits, well, I have a fundraiser.
BONUS TRACK: As I mentioned in an earlier post, I still have my own 2-hour questioning session of Ezra to be scheduled, and I can assure you I will be demanding (using Ezra's own logic against him) that he turn over copious amounts of Rebel News financial data relevant to my defense (and, yes, we will all be learning about the inner workings of The Democracy Fund, among other things). Related to this post, I will of course ask Ezra to provide any evidence that he publicly corrected the record regarding this claim, so I am nothing but fair. But I'm still giving some lucky reader the chance to collect that bounty first. Because that's just the kind of guy I am. There will be more bounties, so you might want to check back regularly.
Coming next: How Ezra misled everyone about donations being "matched", and subsequently screwed the Red Cross out of more than $120,000. You'll really want to read that one, for which I will be offering not one, but two cash bounties.
AFTERSNARK: Just to make sure there is no suspense, here is the public record of donations to Ezra's 2016 fundraiser, showing the exact amount of $162,476.00 donated: 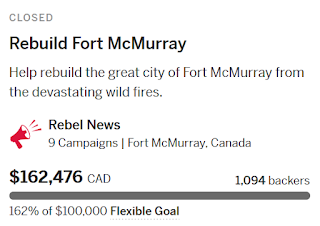 and here is a screenshot of an email I received a few months after that fundraiser ended from the Red Cross' Susan Larkin: 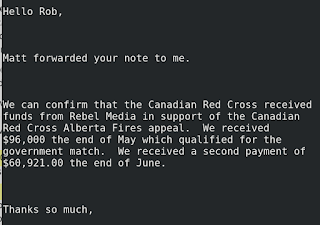 showing that the full and complete amount eventually turned over by Ezra was ... $156,921.00.
Please don't make me explain the arithmetic.
Posted by CC at 3:15 AM

Anon: A number of people noticed that a long time ago. Ezra's argument that he provided that $10,000 to cover the processing fee shortfall from everyone else's donation makes no sense whatever since, as you say, the instant he "donated" it to the fundraiser, it lost $500 totally unnecessarily.

As part of discovery (whenever that happens), I will be specifically asking Ezra to explain the rationale for the above.

This public retraction, if it exists, should already have been produced in Ezra's affidavit of documents. It's clearly relevant and material to the case, and he has an obligation to produce it. Even if this retraction no longer exists, but once did, that should also have been noted in the affidavit.

Anon@7:23AM: I have never seen such a retraction, which is why I have offered $250 for anyone to produce it.

"Even if you believe that Ezra's $10,000 was to make up for the processing fee, wouldn't it have been smarter to just give that $10,000 right to the Red Cross" and tell everyone else to give their donation directly to the Red Cross?
Or was Levant eager to grab a little reflected glory at the Red Cross's expense?

Anon@8:18AM: Once you see how many times Ezra and his Rebel colleagues patted themselves on the back for their (phony) generosity, I think that question answers itself.

Anon at 8:18: In addition to the fake generosity angle noted by CC, you need to remember that the most valuable asset ANY fundraising organization holds is its current donor list. Forcing donors to route their contribution through the Rebel allowed Ezra and Co. to update and expand theirs.

Anon @ 11:15AM: The rather obvious use of the fundraiser for self-serving data collection will be the topic of a future post, and also the basis of at least a few questions during discovery.

A quick search, and it seems you can only complain about the *conduct* of a judge, not their *competence* with regards to legal matters. Those fuckers are in for life.

If you win, can you can get damages for having your time wasted?