In today's episode of my posts leading up to my February 12 appeal against Ezra Levant regarding his 2016 Rebel Media Indiegogo fundraiser for Fort McMurray, I'm going to explain one of the more duplicitous aspects of that fundraiser, an aspect involving two seemingly-unrelated claims that Ezra was making throughout the life of that fundraiser and even for some time afterwards.

During the course of his May 2016 fundraiser, Ezra -- on numerous occasions -- made both of the following claims quite publicly:


While these two claims would seem to have little to do with one another, it turns out they collide later in a very awkward and embarrassing way.

Let's begin with the first claim -- that all (that is, "100%") of the funds raised via Rebel Media's Indiegogo page would be turned over to the Red Cross. Unsurprisingly, from the very beginning, that claim was met with overwhelming skepticism, as countless readers on social media pointed out the painfully obvious -- that in exchange for registering an Indiegogo fundraising page, you agree to turn over 5 per cent of all donations.

There is nothing untoward about this 5 per cent deduction; it is, in fact, Indiegogo's standard "processing fee" and is the basis of their business model -- put more simply, it's how they make a living. There is nothing secret about the processing fee; everyone knows about it and, more significantly, when you register an Indiegogo fundraiser page, you have to explicitly click that you accept the terms, which does indeed include the processing fee. In short, it is physically impossible to register an Indiegogo fundraiser and not know that they will collect their standard 5 per cent.

Despite the above, throughout the entire month of May 2016, both Ezra and other staffers at Rebel Media stubbornly stuck to their claim that "100%" of all funds raised via the Indiegogo page would reach the Red Cross.

To start things off, here's a snippet from the 2016 Indiegogo page: 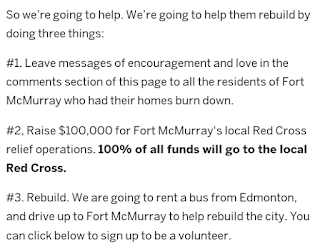 In case you didn't catch the claim there, it is repeated elsewhere on that page:

And once you pop over to Twitter, the reassurances come fast and furious. There's this one: 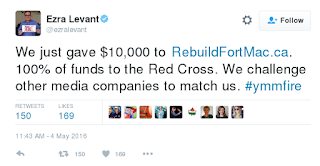 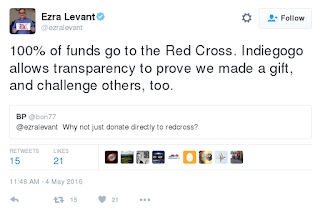 Most critically (and pay attention here), Ezra was even assuring people publicly about the 100% turnover when, in early June, he began tweeting at me personally. There's this tweet of Ezra's from the morning of June 5: 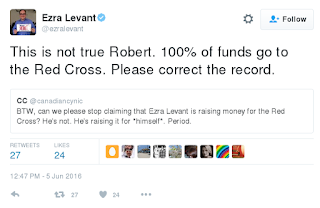 I could go on, but I think I've made my point; that in the face of month-long skepticism and criticism, Ezra Levant never, ever wavered in his insistence that the full "100%" of funds would go to the Red Cross and, more to the point, never, ever addressed numerous people on social media who directly and explicitly asked Ezra how that could be possible, given Indiegogo's 5 per cent processing fee. In any event, let's (temporarily) put this issue to the side and visit the other one.

In addition to his dogged insistence of "100%", Ezra (and others at Rebel Media) were also publicly bragging about how Ezra started things off with the very first donation of $10,000, ostensibly as a show of his bottomless humanitarianism and as a challenge to others to match his boundless generosity.


Right on the Indiegogo fundraiser page, one reads about Ezra's initial $10,000 "contribution": 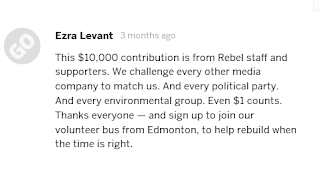 Shortly thereafter on the morning of May 4, Ezra begins patting himself on the back for his generosity: 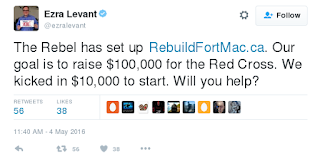 and, three minutes later, continues the self-congratulation with: 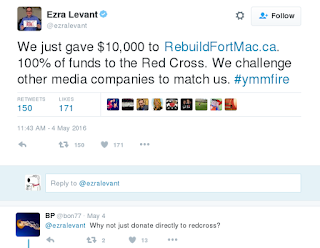 At this point, we need to recap because what happens next is quite stunning. Thus far, we've seen Ezra Levant, on numerous occasions and quite publicly during the course of his fundraiser, assure all donors to his Indiegogo page that:

Keep these two claims in mind as you see what happens next, as it's quite something, because it was in the June 7, 2016 Statement of Claim from Ezra that I, for the very first time, saw the following claim from Ezra:

Go back and read that again slowly until you appreciate what Ezra is suddenly claiming -- for the very first time (and not publicly but only in his June 7, 2016 Statement of Claim to me), Ezra has changed his story dramatically, and is now taking the position that his initial $10,000 donation is, in fact, not a "donation" at all, but is reserved as some sort of Indiegogo slush fund to cover the 5 per cent Indiegogo processing fee that people had been telling him about for the last month and that had, of course, been deducted from every donation coming in.

Let me describe this another way -- having bragged for a month about his dizzying humanitarism, Ezra is finally (and quietly) admitting that he had been misleading donors that entire time, and that the only way he could technically continue claiming that 100% of donations would be turned over is to (here it comes) quietly go back and redefine his own $10,000 outlay as not a donation after all, but a backstop to cover the 5 per cent Indiegogo processing fee, the very problem he created by registering an Indiegogo fundraising page in the first place. But don't go away -- it gets worse.

Note in the above how Ezra describes his $10,000 no-longer-a-donation as a top-up "if Indiegogo took a fee for processing the donations."

Ezra is now clearly trying to give the impression that he wasn't sure if there would be an Indiegogo processing fee, despite the fact that:

But it gets worse (as you knew it would).

As you might expect, I pointed out this howling inconsistency in my Statement of Defence, at which point you will never believe what came back in Ezra's August 2016 Reply. I give you paragraph 4(a):

This is Ezra's rebuttal to my pointing out his spectacular historical revisionism as to his $10,000 "donation," and it represents the final duplicitous bit of sleight of hand since, as you can see, Ezra is finally admitting that, well, of course there is a processing fee associated with online fundraisers.

Pause, take a breath and think about all of the above as I recap the evolution of Ezra Levant's Indiegogo fundraiser.
Quite simply, after having assured everyone regarding 100% for the entire month of May 2016, and refusing to listen to or address countless people trying to explain to him how his claim could not possibly be true, Ezra resolved his obvious deception by going back and redefining what his initial $10,000 was for. In short, Ezra was saying, "I can promise you that 100% is being turned over, as long as you let me redefine the words '100%' and 'donation'."