As is his wont, Rebel News' Ezra Levant flings himself onto his fainting couch, clutching his pearls and playing the downtrodden victim:

when even a cursory investigation shows that the PPG is entirely within its rights to tell Rebel News to eat a bag of dicks. Let us proceed.

Anyone is entitled to read the official application to be a member of Canada's PPG here, and it takes no time at all to spot Ezra's problems. Let's focus on the following declarations that any applicant is required to accept:

so let's go through them one at a time to appreciate why Rebel News does not even remotely qualify.

My principal occupation is reporting, interpreting or editing Parliamentary or Federal Government news.

That would be strike one since, to my knowledge, Der Rebel has never, ever, ever had a staff member whose principal occupation was focused on Parliamentary stuff. What the above demands is an applicant who does not run around the country covering protests and vaccinations and truck rallies, and pops in to check out Parliament only when they happen to be passing through. That alone would explain why ex-Rebeler (and Alberta resident) Keean "Tomorrow Belongs To Me" Bexte was repeatedly turned down, given that he seemed more interested with stalking transgender people and chasing a creeped-out Greta Thunberg down a hotel corridor: 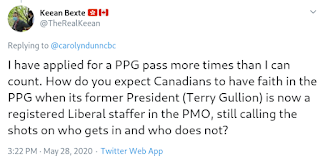 So we can already understand why the PPG told Bexte to take his Maxime Bernier blow-up doll with realistic orifices and hit the road. But it gets worse, as we read declaration the second:

I am assigned in Ottawa on a continuing basis.

Once again, we can see that the PPG is not interested in occasional drop-ins; if you're not a resident of Ottawa, you don't get to stop by and do PPG-type stuff on your way through town.

Which brings us to declaration the third, which simply expands on the first two:

I require day to day use of Gallery services to fulfil my functions.

See above ... either you're there on a daily basis to fulfill your Parliamentary reporting obligations, or, well, piss off, all of this explaining why the PPG is entirely within its rights to keep showing Rebel News the exit. And if all that wasn't enough, well, there's this towards the end [emphasis added]:

I understand that as a Gallery member I can't represent interests of political parties, governments, non-parliamentary organizations or others than the news organizations I work for and I commit myself to follow the rules of the Gallery.

And given that Der Rebel regularly sells pandering news coverage to whatever politician or political party can write a suitable cheque, well, can we all agree that Rebel News does not check a single box required for being a member of the PPG?

It's also more than a bit problematic that Der Rebel's approach to "journalism" seems to involve trying to become part of the story...

We'll be happy to consider your application. Please forward a copy of your editorial and journalism standards and policies. Ensure that you have addressed the following areas:
- balance
- objectivity
- redress and correction of errors
- use and verification of sources
- opportunity for response by all parties in a story
- clear measures for separation of editorial, commercial and journalistic content
- avoidance of conflict of interest, and clear identification of any potential conflict when using specific sources

Examples of all the above are posted on the websites of every major and minor media outlet in the country should you require templates.

MgS: While that might be true, the point of this post was to demonstrate that one does not even need to get into how shitty Der Rebel is as a media outlet; one need only point out that it does not qualify under the PPG's eminently reasonable requirements for accreditation.

"I understand that as a Gallery member I can't represent interests of political parties, governments, non-parliamentary organizations or others than the news organizations I work for and I commit myself to follow the rules of the Gallery."

Obviously that excludes Rebel News and the other Levantines, but doesn't the same argument apply to Xinhua? Chinese state briadcasters represent the and obey the Chinese state.

@Anonymous Well, yeah, but it would then apply to the BBC too and, for that matter, the CBC. You gotta let SOMEONE in.

PLG: distinguo, dear boy. You're confusing a "state" broadcaster with a "public" broadcaster, a distinction Ezra loves to ignore.
State broadcasters operated as an external communications department for the government, under the direct oversight of the (usually totalitarian)government). Xinhua, Soviet-era Pravda, KCT in Korea, IRIB in Iran, etc.
Public broadcasters, while they receive government funding, operate independently of government; they may be accountable to the national licensing body for meeting the terms of their license, but they are editorially independent.
Sites like the Rebel, TNT and the Post Millennial like to pretend that receipt of federal funding equals editorial subservience to the state. Ezra didn't always think that way - he and Sun TV were at the front of the line arguing for mandatory carriage and fees from the cable companies back in the late nineties. Their pitch failed, Sun shut down, and Ezra suddenly decided that he didn't really want all that tainted money ANYWAY.
What Ezra fails to note is that virtually every serious media outlet of every political stripe receives money (grants, contributions, production funds, tax incentives) and in some cases direct funding. He usually fails to mention that the Sun newspaper chain, and even Epoch Times, get funding support from the feds.

Chinese journalists are expected and assumed to be servants of the Chinese state - the Chinese Communist Party. We've seen what happens when they don't do their duties properly recently in Hong Kong.
I don't know about the CBC, but one of the reasons the BBC has so many problems at the moment is because the British government dislikes its refusal to serve the government's interests.

I can assure you CBC journalists are not expected to be, do not see themselves as, and are not servants of the state. And the notion of the CBC as a "tool of the Liberal Party", Ezra's favourite line, is risible; no Prime Minister hated the CBC more than Jean Chretien, and his government delivered more severe cuts to public broadcasting than Stephen Harper.