Dear #FluTruxKlan: You're sure you've thought this through?

I've muttered about this before, but it's time to truly analyze just what the current collection of truck-driving yobs, yahoos, white nationalists, anti-Semites and hillbillies in the "Dumbfuck Convoy" expects to do when they hit town on Saturday, and how well that's going to work out for them.

You think so, do you? Well, let's talk about that, shall we? And let's ponder the actual details.

So ... you're going to be tooling into town, say, Saturday morning, just itching to cause trouble, and you're coming up the Queensway, approaching downtown and ... and ... well, what exactly? Do you think you're just going to exit the Queensway and toodle up to Parliament Hill? Really?

How many of you have any idea what driving a big rig around downtown Ottawa is like? So you exit the Queensway, and waddle up Nicholas, and turn left on Besserer and right on Dalhousie and ... well, now what? You think you'll just get onto Rideau, pass the Chateau Laurier and pull up in front of Parliament? Is that your plan? Because I don't see that happening, for a number of reasons.

First, if you listen to yammering blowhards like Theo Fleury, hey, there's like 50,000 trucks and half a million people, whoo hoo! And even if you know that's bullshit, why don't we take idiots like Fleury at their word and see how that ends?

So, 50,000 vehicles parking in front of Parliament? No. For obvious security reasons, I'm fairly confident that the local constabulary isn't going to let that happen so, let's go, let's go, move along, to ... where precisely? Where exactly do you plan on parking 50,000 vehicles? I mean, you've made arrangements, right? You're not just showing up without, you know, a plan, are you? Surely you're thought this through and you know just how this arrival is going to work, because not having done that would be spectacularly stupid. In any event, onward.

So, you've parked (God knows where), and you congregate on the Hill on Saturday, and you have a ripping good time totally maskless and in close proximity to thousands of other unvaccinated and maskless morons who are huddling together for heat, and you listen to unprincipled opportunists like Andrew Scheer and Pierre Poilievre and other various racist douchebags and you're having a great time shrieking pointlessly into the wind which, we have to say, is a mite chilly: 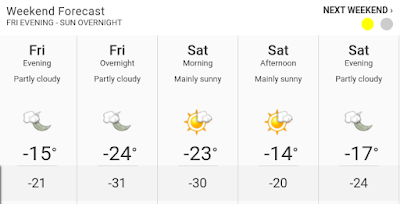 But no problem, because if it gets too cold, you'll just wander back to your truck and fire it up and sit there in the warmz, oh, wait, no, you won't, because it turns out that Ottawa has some of the most draconian "no-idling" bylaws in the known universe, so that's not happening, but you knew that because of your careful planning, right? In any event, you stand there in the -20 wind chill and listen to equally-stupid people ramble on, and you're having a great (albeit utterly ineffective time), and the afternoon drags on, and the sun starts to go down, and you're really fucking freezing and hungry by now, so you all decide to grab a bite ... uh, where?

Because, you see, most restaurants are enforcing strict indoor dining limits, and even if they weren't, well, most of you idiots aren't vaccinated (I mean, that's the whole point of your pointless convoy, right?) so you wouldn't get in anyway, but you knew all that because of all your careful planning, so you'll head off to your hotel/motel, which you booked ahead of time because that would be the smart thing to do, only to find that most hotels are simply not set up for parking for thousands of big rigs, and indoor garages sure as fuck aren't accessible, but you knew that because of your careful planning, so you scramble around trying to find some side street where you can stash your rig, and you and your idiot friends all congregate at the Concorde Inn in Vanier, where you try to order 3,600 pizzas for delivery and they laugh at you and hang up the phone, and it's right about now that you're thinking that maybe you didn't really think this through and you're wishing you were back in Red Deer but, hey, freedom!

And you get up the next morning and wander out in -30C wind chill and try to remember where you parked your truck, hoping it's still there, and come to grips with the fact that you have several days of driving home across the Canadian prairies in early February, and you hope like hell there's no blizzard that closes the Trans-Canada between Winnipeg and Regina for days, and you finally realize that you are, in fact, a fucking idiot.

Have I missed anything?

Nothing says "carefully thought out detailed plan" like having the whole thing run by a senior member of a fringe political party dedicated to making a landlocked province with a resource-export driven economy into a sovereign nation surrounded on all sides by hostile neighbours. These are people who would go down into the dark basement to check on a gas leak using their trusty Zippo lighter for illumination.