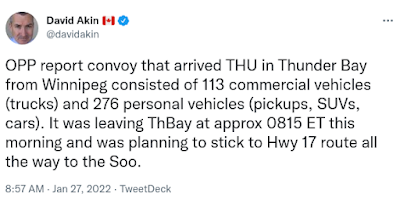 Just heard an interview on BBC with a trucker waiting outside Toronto to join the convoy. Over the course of just three minutes, he told the world:
- that this was the biggest protest in Canadian history (incorrect)
- that this had been declared the longest convoy in history (the only source I can find for that assertion is an article by Joe Warmington, whose assertion began "Some people say that this MAY be...")
- that 80% of Canadians support the truckers
- that "literally every overpass from BC to Ottawa have been jammed with hundreds of cheering supporters"

To his credit, the BBC announcer noted at several points that there didn't seem to be any evidence for any of these assertions. Hilarious, when the trucker declared that "all of Canada was pissed off at Justin Trudeau", the announcer interrupted him, admonished him that "we don't use that sort of language on the BBC", and ended the interview.

That was funny. Less funny was the fact that this poor trucker has actually no idea what's actually going on with the convoy.