Dear Erin O'Toole: You suck as a human being.

It was positively cringe-inducing, listening to Erin O'Toole giving the Dumbass Trucker Convoy the common courtesy of a reacharound last night on live TV, but perhaps the cringiest part of his pathetic pandering was his insistence that everyone's voice needs to be heard and that he was willing to meet with the truckers to learn what they want.

What they want, you spineless twat?

How in the fuck have you not figured this out? What do you think you would learn from them by sitting down for a chat? What piece of information do you think you're still missing, you irredeemable suck-up?

Here's a challenge for you, Erin. Go have your meeting, then promise us that you will have a live press conference immediately afterwards, and let us in on just one thing you learned from that meeting that you assure us you did not already know.

Can you do that, Erin? Because that would be must-see TV.

P.S. It's even more maddening when mealy-mouthed appeasers like O'Toole insist that "everyone's voice has a right to be heard."

Really? Since when? Seriously, at what point did even the most deranged hillbilly spewing violent eliminationist rhetoric earn the privilege to have a guaranteed audience with federal politicians? If some trucker rolled into town sporting graphics on the side of his truck insisting, for example, that O'Toole should be "road kill": 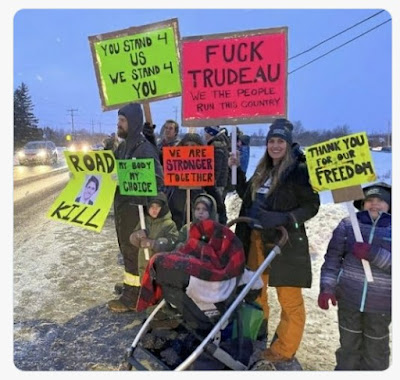 would Erin take to the podium and assure us that everyone's opinion was relevant, and that he was willing to sit down and listen to the grievances of someone who openly suggested that he should be killed?

Can we please knock it off with this, "Everyone's opinion is valuable and worth hearing?" It's bullshit.

Erin can never say what he really thinks because he knows that his party's base constitutes a fringe minority of the electorate. He has to speak in euphorisms and platitudes and generalities. But since they're his base he has to make those generalities sound somewhat sympathetic to them.

It's a shameful process that fools no one.

I honestly do feel that people are becoming increasingly polarized. Especially in recent years. I don't know what to do about that.

It's just a convoy of "friendly sausage makers" - I'm sure they just want to sit down with the GG and PM over nice hot cuppa and work things out.

But ... this is just the party of "ordered liberty" , right? These truckers are organized, so there's the ordered part ...

O'Toole doesn't mean a syllable of it anyway. If there's a left wing protest, you're not going to hear him going on about THEIR right to be heard. If there's a Palestinian protest, he won't be on about how important it is for everybody to be heard. He, and basically all conservatives, are absolutely down with censorship if it's censorship of anyone other than them. Their free speech for all posturing is the purest hypocrisy.