I’ve always known you were an ignorant, mouthbreathing, hypocritical misogynist. The fact that you’ve allowed a flaming psycho like Ken to expound on his obvious hatred for women in your comments for days on end just proves it.

Don't worry -- I made sure to take a screen cap just in case you decide it might be good idea to start disappearing his ravings. See? 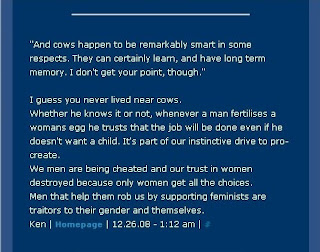 It does dovetail nicely with SUZANNE's characterization of women as livestock, though.

Going by Ken's "logic," if men who support feminist are "traitors" to their gender, what does that make anti-feminist women?

Not that I go by this zero-sum anti-feminist crap.

Let's hope it's the eggnog talking.

You know, I get the feeling Ken doesn't get laid very often. Call it a hunch.

It's OK, CC. He conveniently pointed out that he obviously lives near cows. Things can get awfully lonely around the holidays down there on the farm.

Come on, Frank. Even cows ain't that stupid.

Surely anti-feminist women, according to Ken and his cohort of would-be patriarchs and promise-keeping non-girly men, are R.E.A.L. women? The perfect fertile fields to plow, as Gawd intended (and Ken would be eager to do)?

"Even cows ain't that stupid."

he did mention that he shoots them first.

It really makes you wonder which specific, hairy arm-pitted feminist lesbian so traumatised Suzanne and sent her over the brink to the point where she can no longer distinguish between those men who support her because they admire her "independent" thinking and well-articulated ideas and those disturbed, moronic misogynists who agree with her because she's a woman who confirms their delusions about feminism...one being that's it's central to the quality of their sorry-assed lives?

Maybe there wasn't one. I get the impression Suzanne hasn't interacted with a real live woman in quite a long time.

"he did mention that he shoots them first."

Well that'd help put Elsie in the mood for love.

He sounds like he might be a convicted rapist. Is he posting comments from prison, do you think?

Yeah, sooey, it sounds exactly like he's upset that grabbing them by the hair and raping them doesn't have the same outcomes it used to. Did you know that they even send guys to jail for that these days?? No kidding.

By giving Ken a forum to spew his hateful opinions and his violent wish to harm women, Blob Blogging Wingnut is supporting his views.

It doesn't surprise me that SHE accepts the expression of a would-be-rapist in the comments to HER blog. After all, HER idol Sarah Palin supports giving rapists power over their victims, by forcing women who have been sexually assaulted and impregnated by rapists to carry the unintended pregnancies to term.

Check out Ken's Fantasy Abortion Doctor in the comments with this post.

That's some hyperactive imagination old Ken's got going there.