Stop it! You're killing me!


An irony-drenched two-fer from Li'l Miss Douchebag herself: 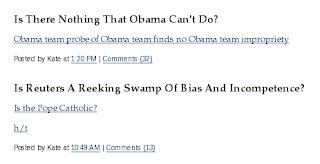 1) Obama won so no one gives a fuck what you think about him anymore, and

2) A Blogging Tory whining about someone else's bias and incompetence should be a jailable offense.

Ooh. I'd buy a card with that greeting on it: "Fuck off. Oh, wait... Merry Christmas. Now fuck off."

So these past 8 years of you whining and bitching like a little titty-baby about President Bush, we were just supposed to ignore all that? Fuck, you are dense, CC.

President Bush was a mouthpiece for a US administration run by Dick Cheney and his posse of greedy, opportunistic and corrupt friends.

LOL! It's Christmas morning: why is "Jinx McHue" sitting on the internet instead of in a church pew? Or enjoying some quality time with family?

I think "Jinx" might be a dirty rotten godless heathen family-hating libtard.

Or maybe just a hypocrite?

"we were just supposed to ignore all that?"

the difference, stinx, is that obama has yet to serve as president, so kkkate's only real gripe is that he won the election. her contrived reaction to the results of the internal audit are just sour grapes, unless, of course, she has the evidence with which to refute.... (crickets). whereas cc's (and all of our) objections to the chimp's presidency have been based on the events of an actual presidency.

you may now resume your profound ignorance, stinx. merry fucking jinxmas. "a child is fucking born", and all that tripe....

Bitching and griping about an admin that obviously lies about whatever they want so they can go kill people and appropriate oil, read "steal", is a valid criticism, a necessary one, one that is needed. Bitching and griping is needed in order to educate the stupid fucks that swallowed unsophisticated, transparent bullshit. It is the duty of mass media to do this in a democracy in order to report the truth and hold governments to certain standards of truth and openness. But Jinx McHue is one of those incredibly fucking stupid conservatives who cannot grasp the easiest of circumstances and context and therefore would benefit from bitching when it shows the pathetically stunted and childish actions of a corrupt president and government. Fuck..... are you ever fucking dense, you are so fucking idiotic that you behave and say exactly what is needed in order to illuminate just how quickly you not only misunderstand what is an obvious distinction separating criticizing Bush (an inept and bombastic fuckwad with examples of his dishonesty and imbecility) and speculating about the performance of OBAMA who has yet to even establish his demeanor and relative honesty and intelligence.

Fuck, are you ever a typical idiot from the conservative, and painfully stunted - emotionally, intellectually, and educationally - side of the political spectrum.

In fact, your pure and unadultered example of just how fucking stupid and exactly, immediately, I mean pinpoint and precise, timely and perfectly wrong you demonstrate yourself to be - it does all the damage to your credibilty and ```ability to comprehend, such that it isn't possible to do a better job of proving just how2 fucking stupid you are. it's the irony, and it is you. Pure stupidity.

Jinx might actually have a point if there was any evidence that Obama had done anything wrong. Sadly, the physical evidence suggests otherwise:

During a wiretapped November 10 call, a frustrated and financially strapped Blagojevich referred to Obama as a "motherfucker" and said that he would not appoint an ally of the President-elect to the Senate vacancy if "I don't get anything." Referring to Obama, Blagojevich exclaimed, "Fuck him. For nothing? Fuck him." In a November 11 conversation, Blagojevich remarked that he knew Obama wanted Valerie Jarrett, a longtime confidante, to succeed him, "but they're not willing to give me anything except appreciation. Fuck them."

Gosh, that sure sounds like Obama wasn't engaging in bribery, doesn't it? Unfortunately, such trivialities are lost on people like Jinx McHue for a number of reasons, not least of which he's a bigot and doesn't much care for the niggers. That kind of explains why he's such a fan of Kate as well.

"1) Obama won so no one gives a fuck what you think about him anymore, and..."

whoa, whoa, whoa! Wait just a cottonpickin' minute there CC. What do you mean "anymore"? You mean someone once gave a fuck what KKKate thought about anything, ever? I mean outside of the knuckledragging mouthbreathers at SDA, who has ever given a flying fuck at a rolling donut what she has to say?