At this point, "batshit crazy" doesn't begin to do her justice.

Why the fuck do you people even try to have a conversation with that loon? Just call Social Services, have her kids taken somewhere safe, and move on.

STOP, YOU'RE KILLING ME! Why are you still torturing yourselves this way? 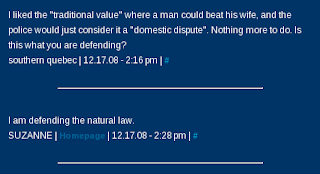 Please tell me SUZANNE's kids aren't being home-schooled. Nobody deserves that.

I wonder what branch of natural law she likes...

I'm a reform Druid myself, I worship small trim bushes... and Ms. Page...

JJ - It's whatever the closed-minded require it to be at any given moment.

Thing is, "natural law" is a very old idea, but it's a moving target.

If one is really interested in natural law, then one ought to be willing to listen to the latest and best scientific understanding of humanity. The fact that she conflates "traditional" (i.e. scientifically obsolete) with "natural" says a hell of a lot.

Civilisation is a rejection of natural law.

Blob Blogging Wingnut is demonstrating once more that SHE is dumber than a bag of hammers. If SHE had two brain cells to rub together and more than a dab of university education, SHE would know that arguments based on religious ideology start going sideways when you start to bring in "natural law" to prop up the zealotry.

"I am defending the natural law."

gravity has a lawyer?!

Has she started fretting about this yet?

Maybe it's her way of saying she's into yogic flying?

The picture on her sight is gross. I don't think she is playing with a full deck.

Remember The Dead Zone? The question posed was, if you met Hitler, and knew what he would someday do, would you kill him? The guy in the movie is convinced he has this ability to see someone's probable future, and the viewer is also convinced so his decision is pretty easy. They only delve into the fact he will be prosecuted for this preventative action. They don't look at "how does he know he's right?"

Suzanne has the same conviction of being certain about her views. She is likewise convinced her visions are true and accurate. Being a natural person, the correct natural law will come to her mind naturally. Therefore, when she speaks the natural law, it is correct and true. Therefore it is ok to kill anyone who disagrees.

She is delusional and possibly dangerous.

"....I dropped out. I hate the post-modern lit theory that I was supposed to adopt."

I believe in the natural law of human behaviour -- as something we need to be wary of and constantly on our guard.

Like, the NLHB predicts that "if someone can game the system, someone WILL game the system", "rational economic man isn't", and "when the going gets tough, hide the damned machetes."

It is our DIS-belief in NLHB that gets us in trouble-- like the lamb who, having been raised with the lion, doesn't realize that their relationship is inherently problematic.

Dis is why we should study history.

My understanding is that natural law, in this context, is the Catholic Church's pretense that its disgusting beliefs are based on natural law, and may therefore be imposed on everyone against their will, not merely those who belong to that evil cult.

"Natural Law" is the underlying right and wrong that is the moral foundation of the Universe, as laid down by God. Unfortunately this very valuable information is only accessible to Suzie Allcaps and her ilk, but they will obligingly share it with you when you transgress.

I'm more of a Law of the Jungle kind of girl, meself...

A few generations ago, the Vatican actually sought an opinion to allow the use of contraception. The opinion came back arguing that natural law was basically bunk. There wasn't anything, it argued, intrinsically more moral in abstention vs. active contraception. Duh.

It was rejected, as it would mean that a long succession of Popes would have been wrong. And how could that be given that Popes have God whispering in one ear? How could the Catholics admit that the Anglicans had it right before they did?

The problem with the entire natural law theory is that humans are tool users, tool builders and are self-aware. We are placed outside much of the continuum of nature by _natural_ choice. It is natural for us to use condoms, for example, because we can build them.

It's natural for us to create and wear clothes as well. You don't see the Catholic Church complaining about that. Of course, the Bible handles that issue, they say.

So, exceptions are handled by instructions from God, apparently.

A bit of a problem when you're an atheist, or when your God or Gods think differently.

Of course, libertarians get themselves into logic pretzels over this issue. Organized interventions into the market they claim to be against natural law as well. Strangely, many (though not all) have no objections to corporations intervening in the marketplace. 'Vulgar libertarians' some call them.

The problem is that you guys are all responding as though SUZANNE was actually trying to express an idea.

She's not. "Natural Law" is one of several rhetorical reflexes she excretes under stress, as a squid does ink or a fleeing baboon does feces. It serves the same purpose - a meaningless, time-wasting distraction deployed under duress.

""Natural Law" is one of several rhetorical reflexes she excretes under stress, as a squid does ink or a fleeing baboon does feces."

Geez balb, I read that in the midst of swallowing a spoonful of soup and almost choked to death. That was dangerously funny.

Yes. BRILLIANT. Also "Gravity has a lawyer??" was responsible for my almost-soup-chokage.