Canadian conservatives livid -- LIVID, I TELL YOU!!! -- over government vaccine mandates that infringe on their bodily autonomy currently positively gleeful after Trump-dominated U.S. Supreme Court just stripped 150 million women of their bodily autonomy.
You can't make this stuff up.
P.S. Apparently, this is only the beginning: 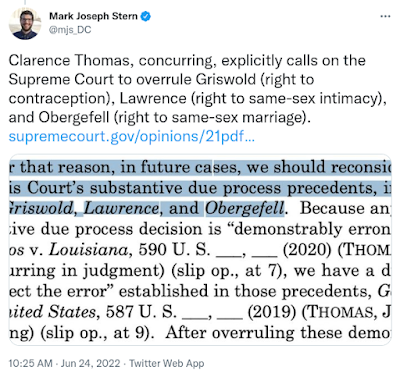 I'm sure Democrats will harness their rage to do what they always do -- turn on each other and stab one another in the back.
P.P.S. Apparently, Senator Susan Collins is concerned, verging on disappointed. That is all.
Posted by CC at 11:49 AM

North of the border, the left better do their damnedest to pin this on the CPC as well.
"This is what happens when you vote Conservative" better be shouted out from every single rooftop in the country.

Is Susan Collins ever NOT concerned? Should probably go see a doctor (or a therapist) about that. I can't imagine it's all that healthy to be concerned all the time.

Justice Thomas wants to rewrite many laws it seems.

He is curiously silent on the need to outlaw miscegenation, perheps he is unduly influenced by his wife. And of course that whole 13th amendment, accepted under duress by the defeated states and should be set aside, yet he is silent on this as well. Shouldn't the states each decide on the slavery option, since they are closer to the people?

Hey Clarence, let’s no forget to go back to disallowing interracial marriage, eh?