Anonymous commenter just gifted me with the following, which I will now share with the world:

Here's another interesting development. The Albino love child of Ezra Levant and Sheila Gunn Reid appears to have been quietly expunged. Try searching for Keean Bexte's "journalist" page at the Rebel. It's gone. Then look for the masthead photo they've been using that shows the whole smirking team, prominently featuring Keean. It's gone too. His "program" is no longer included in their list of shows. I wonder what triggered the final flush? I've actually wondered about his mental health over the last few months (the paranoid fantasies and over-the-top outbursts of rage were getting disturbing), but I'm thinking perhaps it was his unwise decision to seize onto the Dominion voting machine "scandal" before they started suing their slanderers. Perhaps Ezra has decided this is a good time to put some distance between the Rebel and another massive lawsuit?

Things are getting exciting, no? 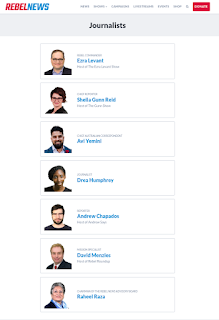 Thank ya very much: I believe I foresaw something like this a couple months back.
THIS SHOULD BE GOOD:

I'm betting he's about to launch a podcast. That'll be fun. I suspect Ezra was getting a little nervous, and began to pull back on Keean's reins in the last few months. He was running some VERY bizarre stories, including his theory that a group of Canadian soldiers at the World Military Games secretly brought the COVID virus back to Canada several months before the virus was actually discovered, and that Trudeau and the Department of Defense were covering it all up.
With NO filter, no editing, no fact checking and no accountability to anyone, it should be fascinating to see just how delusional iyr little albino sociopath becomes.