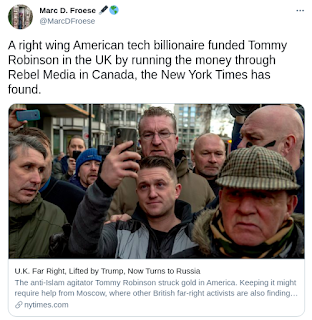 This can't be correct, because the Rebel vigorously opposes use of offshore money and interference by offshore advocacy groups in domestic issues.

The NYT article referenced herein is absolutely fascinating. It was clear for a while that various hard alt-right groups were networking, logrolling, revenue sharing and supporting each other's campaigns, and it all seemed to focus on Tommy Robinson around the time of his trials and run for EU candidacy. Ezra actually a hilariously and horrifically incompetent star struck young blonde neophyte to "cover" Tommy's campaign; the highlight was an unedited handheld hour long smart phone interview shot in the back seat of a car. That part was funny. Less funny was the occasional glimpse of some of the other players who were onsite and backing him during the campaign, including professional thug, provocateur and wife beater Avi Yemeni and others associated with the "Middle East Forum".

The mystery to me was what the Rebel brought to the table. Certainly not coverage, and certainly not clout. Are they just one more money-losing conduit to run money through?