Yeah, about that accreditation ...

Now that Nazi paraphernalia expert and right-wing hack Keean Bexte is no longer a part of Rebel News, is it time for various orgs to yank his accreditation? 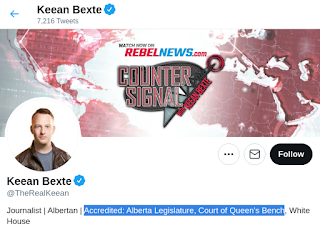 BONUS TRACK: It's worth noting that Rebel Media was not, in fact, accredited properly via a vote by the Alberta Legislature Press Gallery (who rejected them), but via an override by the sleazy partisan hack that is the Speaker of the House, a fact Rebel revealed publicly shortly after it happened:

Quite simply, bragging about your accreditation when it was granted by a single UCP hack is akin to bragging about how you got into law school, while admitting it's because your uncle is the dean.
Posted by CC at 1:17 PM

In Kenney's Alaberta, "accreditation" is more of a statement of fealty to Kenney and his politics rather than an acknowledgement of skill and integrity.

Another one bites the dust...

Will the last Rebel fleeing the building please turn out the lights?

Rebel doesn't push mainstream propaganda like other media, so they are a problem