The knee-slapping hilarity of dead journalists.


Oh, man, I can hardly see through the tears, I'm laughing so hard: 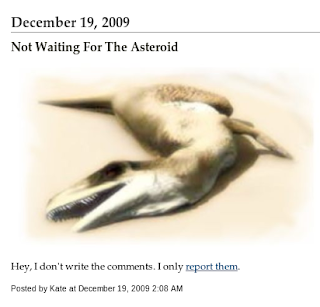 That would be reporting this:

And that's when the Kate McMillan Flying Monkeys descend on her comments section to outdo one another in the "Hey, I want journalists murdered way more than you do!" Rhetoric and Swimsuit Competition:

It looks like lawyers are being surpassed as the most parasitic profession hated by the public.

I wonder how much a Journalist makes? It seems like the payoff would have been much better with a little more effort by going to Law school.
Posted by: Knight 99 at December 19, 2009 2:27 AM


I wish I'd bought the T-shirt:


Well darn. I thought I was linking to a story about something bad happening. What's that old saying..I'd rather have a mother as a whore then a journalist?
Posted by: Justthinkin at December 19, 2009 8:05 AM


I've said for years the only way to save the US is to hang all of the media first. Looks like my views aren't so out of the main stream.

"Freedom of the press requires you support it, not subvert it."

When your group works to subvert our freedoms (speech, guns, property rights, etc) don't be surprised if we wouldn't like to see you pay for it.
Posted by: paulcr39 at December 19, 2009 8:11 AM

Now, where were we? Oh, right ... shrieking inconsolably about a Photoshopped image of something. Carry on, then.

I can't stand those people.

What's worse is they seem to think they're the first to come up with "kill the messenger" to solve the problem.

I wonder, are there dumber people on the Internet than smalldeadanimals commenters?

Speaking as a journalist, first let me just say "Fuck you very much, KKKate."
Those people mostly died for reporting things that the tyrants of the world didn't want reported. They died exposing corruption and wrongdoing, but I guess that doesn't matter to the blar-har-har Stormfront farm team over at Small Dead Animals.
Seriously, the commenters over there make the comments on YouTube look like a combination of Einstein, Plato and Shakespeare.