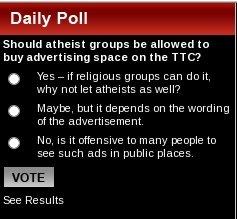 I have to admit, CP24, it would never have occurred to me to have a poll asking whether atheists should be accorded the same fundamental rights as other Canadians. Never would have imagined surveying the general public to see what they thought of according one group of people the same freedoms under the law that all others enjoy.

But now that you've opened those floodgates, we might as well keep rolling down that road, so I look forward to future CP24 polls such as:

And I sincerely anticipate the question in everyone's mind at this point: "Should we drag CP24's editorial staff naked and screaming through the streets of Toronto in January, or would a quick and painless execution at their desks be more appropriate?"

Just vote once. Don't be greedy.

AFTERSNARK: Feel free to suggest other possible CP24 polls. I'm thinking: "Should Christians who toil on the Sabbath be put to death, as dictated in Exodus 31:12-15?" Oh, the possibilities are endless.

A: Yes, but it depends on what colour the collars will be.

I tried to submit suggestions for their next polls, but their comment box has a 100 character limit or something, I dunno.

Religious people shouldn't be allowed to ride on public transit.

How bout the following as possible polls for these whack jobs...

"Homosexuals: Should they be stoned to death or just vilified and ostracized constantly?"

"Peaceniks: Traitors or Idiots - you decide!"

"Supporting The Arts in Canada: Are Artists and their "work": A waste of money or a waste of space?"

"SDA: Is it Canada's Bestest Most Awesome Blog? Or is Kate Really Just an Amazingy Super-Cool Hawtie that rides a motorcycle too!?"

"Stephen Harper: How much will Canada suck if he and the CPOC lose the next election? An immense amount - or an incredibly immense amount? You decide!

Sorry - I've been cramming for the LSAT for the past week and after all that prep at identifying logical fallacies... I could keep going on for a long time on this... but I won't.

"Should homeless people be rendered into foodstuffs or left out in the frozen tundra to die?"