None dare call it "anti-Semitism." 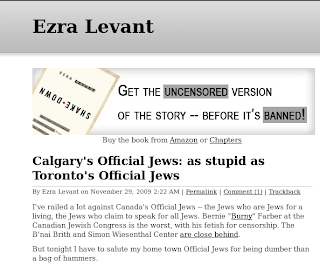 I await the swift and savage condemnation of Ezra Levant by the Blogging Tories with bated breath.

GOOGLE LOVES ME, this I know: 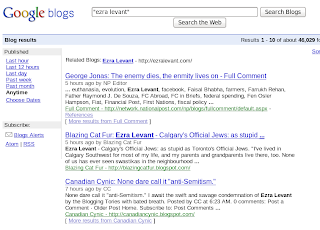 Hm. You'd want to be a pretty official Jew yourself to be calling other Jews official Jews, I would think.

beyond the sheer joy of being snarky, that is.

Good...G_d! I skimmed Ezra's post just now and it was just astonishing. He's nuttier than the nuttiest 9/11 conspiracy believer. Connection upon connection, two degrees of Osama Bin Laden, hyperactive hyperlinking, defamation, vilification, grandiosity, bombast...it's all there! It would take weeks to untangle that to determine its overall accuracy.

Time to send in the nice young men in their clean white coats.

Or alternately, Sohawardy could sue the shit out of Levant. I have no idea how he gets away with it.

As I understand it, any references to Jews, by anyone, under any circumstances, in any forum, on any issue, is anti-Semitism.

Or so I've been told.

Shouldn't the anti-section-13ers be directing their energies towards that roving band of political speech muzzlers attempting to criminalize criticism of foreign countries, anyway?

...noses. It's true. I was once accused of antisemitism for drawing attention to Jason Kenney's large nostrils in a discussion about neoconservatives, the implication of course being obvious to everyone.

And here I was, just talking about nose-picking. Little did I know I was channeling my inner Adolf.

Jason Kenney's got more of a snout than a nose, I'd say.

This is true. I tend to describe people with upturned noses as having large nostrils.

I see BB hasn't returned. Why he ever bothers, I'll never know.

sorry ti-guy. I do have a life beyond the computer, unlike you apparently.

I do have a life beyond the computer, unlike you apparently.

Jeez, is that ever antisemitic.