Yes, it's cruel but here's a recent snap from Blogging Tory Maria Nunes' House of Dumbth, ruthlessly stripped of its context because, really, it stands alone: 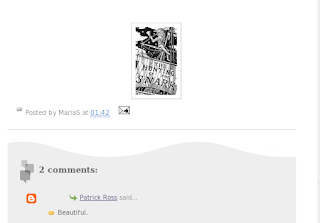 I have to ask, how spectacularly far down the food chain do you have to fall before you start praising Maria "Dodo Can Spell" Nunes for her overpowering intellectual acumen?

I think Twatsy just trying to make friends. You know, like the kid who's a complete asswipe on the playground and is surprised that nobody likes him.

Which is wrongly funny in at least three ways.

Which only partly makes up for the mental image of the Twatsy/Dodo love-fest, unfortuantely.

If they're as stank-nasty on the outside as they are on the inside, I'd rather do acid and go look at Heironymous Bosch murals.

Patrick Ross said...
This comment has been removed by a blog administrator.
4:06 PM

I wonder who "Ted" is? Yet another person PR plans to impersonate?

Liberal Supporter: I wonder who "Ted" is? Yet another person PR plans to impersonate?

Me thinks Patrick Ross has multiple personality disorder. He thought he was Sparky once upon a time.

I think Ted is a new one. Perhaps we should look forward to meeting Ted.

Now never say never: Dodo is trying to impress the boys over at Blogging Tories

although, in PR's world, it seems that hope does spring eternal

"I wonder who "Ted" is? Yet another person PR plans to impersonate?"

Well, Ti, I've heard that one before. It was banal then, and it's banal now.

"And as for Robbie, well, you sound to me like a guy who pays about $50 a pop for his blow jobs."

Um ... OK, I "sound" like someone who frequents hookers? Seriously, is that the suggestion you're making here? That's your idea of cutting intellectual discourse? Really? Awesome.

Patrick Ross said...
This comment has been removed by a blog administrator.
3:08 AM

By "Ted" he probably means me. It's my name, after all.

The discovery of which must have taken, oh, whole minutes at teh Google. That'll probably impress Dodo no end.

Unless he's referring to that guy who hung out with Bill S. Preston?

It's interesting that after posting his observation about who he feels is "running the table on nasty on the inside" he shows up brandishing my name and effectively says:

"Niiice identity you got here ... Shame if anything happened to it ..."

Wonder if he'll get around to mentioning where my kids go to school? That'd be interesting.

I wouldn't put it past him, Metro. This is the guy who, way back when, claimed to have backtracked my IP address, identified where I lived, and threatened to post that information, with no regard to the consequences of any family members. He's a real charmer.

I wonder if his co-workers (current or future) know how he gets his kicks. And, yeah, I'd warn your kids to avoid anyone with a mullet. Given Patrick's relentless defense of NAMBLA Dick Evans, I wouldn't feel comfortable leaving him alone with the young'uns.

Patrick Ross said...
This comment has been removed by a blog administrator.
1:51 AM

Hey PR, you are the one known around Alberta as "Roofie Ross". After all, you support the right of rapists to choose the mothers of their children. How else would you breed?

And I think he means "... with Alex Winters." Reeves played Theodore Logan.