Chronicles of Ezra: How Ezra Levant screwed the Red Cross out of $121,842.

Of all the posts in this series leading up to my trial related to Ezra Levant's meritless defamation action against me, this might be the most depressingly sad-making, as it documents (inarguably and indisputably) how Ezra -- consumed by his own overwhelming vanity and ego -- inserted himself into the collection process for the Fort McMurray Red Cross in 2016 and, in doing so, utterly screwed the Red Cross out of over $120,000.

As with previous posts in this series, I've written extensively about this before so I suggest that you go read those posts from back in January of 2019:

then come back so that we can summarize what you just saw, and I will have two -- not one but two -- bounties related to Ezra and this issue. Take your time, I'll wait right here ...

La da dee da da I miss the rains back in Africa ... ah, you're back. So let's summarize, just to make sure you understand that, unbelievably, what you just read is what you think you read:

To this day, Ezra -- even while constantly bragging about how much he collected for the Red Cross -- has never, ever, ever admitted publicly how much he actually cost them through the use of his personal vanity Indiegogo fundraiser, which brings us to the two bounties you are invited to try to collect.

Bounty the first: Even after it was painfully obvious that Ezra could not withdraw any of the money from his Indiegogo fundraiser in time for it to be matched, he continued to assure everyone it would be done, while refusing to explain how. Only at the very end of the fundraiser (on June 1, 2016) did Ezra surprisingly disclose that it was due to some mysterious "financing" that he had arranged. If Ezra had simply explained that during the month of May, that would have avoided a lot of controversy but, to the best of my knowledge, he never -- even once -- bothered informing people of that, preferring instead to play childish, "gotcha" games, which brings us to the first bounty.

I will pay the sum of $250 (e-transfer) to the first person who can provide evidence that Ezra actually disclosed his "financing" scheme at any time during the month of May, 2016. I am nothing but a fair man, and if Ezra actually published that he was going to solve the matching dilemma by, say, fronting the money himself to make the deadline, I want to know about it. I have looked for such a disclosure and have never found it, but that does not mean it does not exist, so there's the first bounty.

Bounty the second: Even after depriving the Red Cross of over $120,000, for months afterwards, Ezra (and others at Rebel Media) crowed incessantly about their humanitarianism, without actually admitting the spectacular shortfall in what they handed over. To this day, I am unaware that Ezra has ever publicly admitted to (or taken responsibility for) shorting the Red Cross of that amount, and there is your second bounty.

I will pay $250 (again, e-transfer) to anyone who can produce an actual admission and apology from Ezra as to how his ego-driven interference in the Fort Mac donations process ended up costing the Red Cross over $120,000 as I have described above. All I've ever seen is Ezra patting himself on the back for the money he raised, while never adding the part of how he made such a mess of things, so if anyone can produce such a disclosure and apology from Ezra, the money's yours.

Finally, as always, if you think it's worth standing up to the harassment and intimidation of meritless SLAPP suits from professional litigator and smear merchant Ezra Levant, well, I have a fundraiser. And as incentive, here's the deal.

For every $500 in donations, I will publish the next post in the series. So if you want even more crunchy goodness regarding this action, well, you have to pay for it. I think that's a pretty fair deal, no?

Until next time, when the issue of Ezra putting $96,000 on his personal(?) American Express card becomes a slightly bigger deal than you might have suspected.

And there will be further bounties. Count on it.

BONUS TRACK: Given what I've described above -- how Ezra's ham-handed, self-serving interference in the Red Cross donations process clearly deprived that organization of well over $100,000 -- there's more than a little irony in the final page of Ezra Levant's 2016 Statement of Claim, where he insists he is entitled to additional punitive damages because ... oh, just read it: 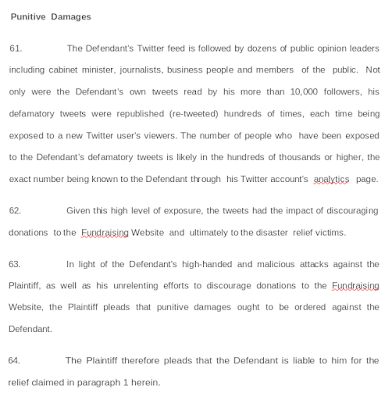 Yes, you read that correctly -- Ezra is demanding punitive damages because my pointing out the financial irregularities and deception in his Indiegogo fundraiser ... deprived the citizens of Fort McMurray of money.

Let me put that another way that makes it sound even stupider: Ezra claims my actions injured the citizens of Fort Mac financially, so he is suggesting that the proper recourse is for the Court to take money from me and give it to ... him.

Make of that what you wish.

If you had this amount of detail about what Ezra did, how did you lose your anti-SLAPP motion?

What part of "stunningly incompetent judge that I would not trust to wax my car" confuses you?

Back in the day, I used to hold a corporate Amex card for travel purposes. The basic reasoning for it was to have a card with no specific limits on it because sometimes we would be called on to travel on extremely short notice, and the airfare alone could be ridiculously expensive as a result. (I had one trip where the tickets were purchased less than 24 hours before departure - somewhere around $4K for the tickets alone)

AMEX was generally fine with whatever you put on your card, as long as they got paid _IN FULL_ by the next billing cycle.

AMEX might have looked at the transaction and called to verify it, but chances are it would go through as long as they believed you were going to repay it _soon_.

MgS: Interesting, as it's still a mystery as to why Ezra did not simply front the entire amount, knowing it was going to be available from the Indiegogo fundraiser only three weeks later. Why he fronted only $96,000 will be a question I will be requiring him to answer when my turn for discovery finally comes around.

I believe that Ezra will withdraw his action at the last possible moment and just before you get your chance at discovery. Otherwise it looks like he will be in deep doo doo.

If he does that, he opens himself to a counter suit for damages. (Unless he agrees to pay CC’s legal costs - which I very much doubt he would do)

If Ezra drops the lawsuit, he's liable for full discontinuance costs according to Rule 23.05 of civil law in Ontario. Here's an explanation by one law firm:

"Rule 23.05 provides that where a plaintiff discontinues an action against a defendant, the defendant is entitled to the costs of the action unless the court orders otherwise. The rationale for this presumption in favour of an entitlement to costs is obvious. By commencing an action, a plaintiff compels a defendant to incur litigation expenses. Only when there is a judicial determination that the plaintiff's action was appropriately brought does the responsibility for the litigation costs logically shift to the defendant. Where an action is discontinued by the plaintiff, there is no such judicial determination. In such a case, absent some showing of exceptional circumstances, the defendant should be entitled to recover its costs."

And given that this lawsuit was total bullshit from the beginning, and that Ezra was recorded BRAGGING about suing CC just to harass him, Ezra will definitely have to pay CC's costs in this matter.

Good to know. Of course, Ezra isn’t going to drop the suit because ultimately even if he loses, he can use it to fleece the money from the rubes dumb enough to follow him. They’ve already proven they will buy a whole bunch of BS, no reason they won’t do it this time.

Revised PT Barnum: “There’s a sucker born every minute, and an Ezra to take his money from him”.