This cannot get any funnier.


You have, of course, been following the recent misadventures of Patrick "Mullet Boy" Ross, including his savage intellectual beatdown at the hands of one David Climenhaga in the comments section there (in which he gets slapped around as "Patrick Ross," then reappears under a new identity of "Sparky" in order to give the impression that he has friends or something). But just when you thought he couldn't self-immolate any further, well, a little birdie sends me the following screencap of the links at the bottom of an article that Twatsy himself wrote about Janine Krieber over at the "Nexus of Dumbassitude": 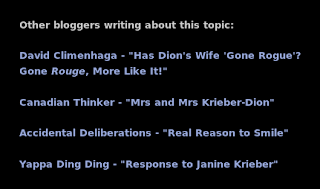 Pause to truly drink in the hilarity of Twatsy writing a post about Krieber and (unintentionally, I'm sure) accompanying that post with a link to the very article at which he got wickedly spanked only two days ago.

You can't make this up. Seriously, you can't. As intellectually creative as I am, even I couldn't have dreamed up something that made Twatsy look like more of a drooling buffoon than that.

Can it get any funnier? We'll just have to see.

Being a paleoblogger, may I ask: don't those links go up automatically? I've never been sure.

I have followed the Patrick R drama today.

I knew something was weird on my comment board on my posting about Pte Bethany Smith. Patrick made a few comments which I refuted and then for the first time on my page a "Sparky" makes an almost identical comment to the second one of Patrick's.

I clicked the name; sure enough, it's the fake Sparky aka PR.

Why would he feel a need to do this? I didn't bar him from my page, but I'm starting to consider the idea.

I don't think including a link to David Climenhaga was unintentional. Kid Dyno-mullet more than likely doesn't honestly believe he got spanked over there.

It's more than likely that those are auto-generated links. It's just hysterical that one of them represents Twatsy getting his ass handed to him intellectually.

There is a God after all.

CC - I think he picks the links at the end himself; I suspect this, because he once attributed a post to me that had been written by a guest-poster. Of course, I could always be wrong...