It doesn't get any funnier than this. 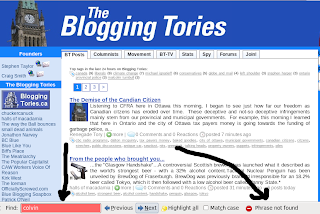 I don't know. The title of the first post on that list..."Demise of the Candian Citizen" is pretty funny. Well relative to the Boggin' Torees of course.

Look, we all know these people are never going to entertain serious criticism of the Conservative Party. It's the real genius of their political movement that it has attracted the angriest, the dumbest, the most credulous and the most dishonest people in Canada. They don't even have to be persuaded or coerced or even paid (?) to say the things they do.

All the principled Conservative bloggers (both of them) left years ago.

That's strange because Hunter had a 'Colvin' label on her post yesterday...and she did spell it right.

Oh, this is not to say that no one over there is writing about Colvin. All that search does is scan the main page at the BTs, generally a couple dozen articles. It's still embarrassing that you can have that many BTs writing posts and not one out of that number addressing Torturegate.

If I'd continued on to page 2 or 3 or 4, I'm sure I would have finally found someone calling Colvin a deluded, Liberal liar.