Fair and balanced. And Jewish.

Al-Jazeera English, the English-language service of the Qatar-based broadcaster, has been approved for distribution via satellite in Canada.

Of course, you first have to assuage the concerns of the right people:

The Canadian Jewish Congress and B'nai Brith Canada had expressed concerns about how balanced Al-Jazeera's reporting would be, but they neither opposed nor supported the application. The Jewish organizations instead urged vigilance in case the news service engages in Holocaust denial or other anti-Semitic statements.

The CJC also urged the CRTC to ensure Al-Jazeera English remains independent from its Arabic-language counterpart.

Good thinking. It's important to let the CRTC know that you're not a big fan of people saying things you don't like. That's getting dangerously close to free speech and journalistic independence and, God knows, we can't have that setting an ugly trend.

A group called Honest Reporting Canada cited two examples of Al-Jazeera English's journalism that it said did not meet Canadian standards of accuracy and balance, but it did not officially oppose the application.

"Honest Reporting Canada?" What's that all about? Oh: 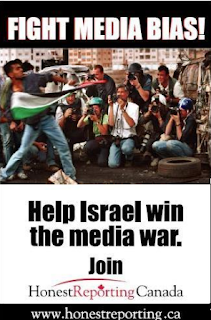 Yeah, they're going to be a fountain of unbiased, objective information.

In other news, Canada's Blogging Tories vowed to tear themselves away from Fox News every so often to make sure Al-Jazeera isn't pulling anything funny.

Yeah, they're going to be a fountain of unbiased, objective information.
But they have the word "honest" in their name... that's good enough for the Blogging Chowderheads and pro-Isreal Liberal faction...

Even going so far as trying to deny the Al-Durrah incident...
http://en.wikipedia.org/wiki/Muhammad_al-Durrah_incident

"It took about 45 minutes for the ambulance to reach the two, because of the heavy Israeli firing on everyone who dared to reach the young boy and his father."[41] Bassam al-Bilbeisi, the driver of the first ambulance to arrive, was shot dead, leaving a widow, Hanan, and 11 children.
Yup, the IDF are not barbarians and war criminals... Fuck them all.

Balanced news coverage would have included a Jewish station, in addition to Al Jazeera. This error of omission creates only one perspective. Holocaust denial is a part of this equasion, as it has been given equal time as a "different truth." Yet, there can be only one truth.

Whenever we stand up to those who deny or minimize the Holocaust, or to those who support genocide we send a critical message to the world. We know from captured German war records that millions of innocent Jews were systematically exterminated by Nazi Germany - most in gas chambers. Despite this knowledge, Holocaust deniers ply their mendacious poison everywhere, especially with young people on the Internet. Holocaust books and films help to tell the true story of the Shoah, combating anti-Semitic historical revision. And, they protect vulnerable future generations from making the same mistakes.

I wrote Jacob's Courage to promote Holocaust education. This coming of age love story presents accurate scenes and situations of Jews in ghettos and concentration camps, with particular attention to Theresienstadt and Auschwitz. It examines a constellation of emotions during a time of incomprehensible brutality. A world that continues to allow genocide requires such ethical reminders and remediation.

Many authors feel compelled to use their talent to promote moral causes. Holocaust books and movies carry that message globally, in an age when the world needs to learn that genocide is unacceptable. Such authors attempt to show the world that religious, racial, ethnic and gender persecution is wrong; and that tolerance is our progeny's only hope.

Balanced reporting from Al Jazeera is an oxymoron. They despise all things Jewish. My hair stands on end whenever I hear anyone speak of the Holocaust as though it was a figment of some Zionist's imagination. And, while I can sympathize with the Palestinian desire to have a homeland, launching rocket and suicide bomb attacks is not the way to endear themselves more with Western society.

this error of omission creates only one perspective.

Are you under the impression that it's up to the CRTC to go out and sign up channels? Because that's not the way it works, you know.

If there's a "Jewish equivalent" of Al-Jazeera, it's more than welcome to apply for a broadcast license in Canada.

Oh sorry, you're an American and therefore, an ignoramus. Never mind.

Mind your own business, by the way.

@Charles:
Just so's you know, the channel is Al-Jazeera English. A station the Economistpraised for balance in its reporting.

The Arab-language version broadcast in the Middle East is more anti-semitic, but they're playing to their audience, too. Just as FOX news plays to theirs.