Chronicles of Twatrick: From bad to worser.

And if you didn't think things could go any further downhill for Lloydminster's Patrick "Lord Baron Twatrick von Loadenhosen" Ross, you misunderestimate Patrick's insatiable appetite for self-destruction.
First, it would appear that Patrick's recent idiotic and meritless Statement of Claim: 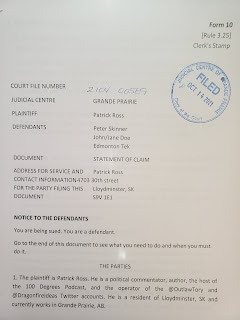 is a nullity (one of Patrick's favourite words) since, as best I can tell, Patrick did not first serve the legally-required Notice of Libel, and he is now past the eight-week deadline for doing so.
Many legal actions come with a "limitations period" -- a deadline before which you must file your action, or you lose the opportunity to do so. With respect to defamation actions, in Ontario, that's six weeks; in Alberta, it appears to be eight weeks. In short, Patrick's idiotic action above is dead in the water since he spent so much time bloviating and "blar-har-har'ing" over it that he missed the deadline. So not only will that filing be kicked to the curb, but Patrick will be required to pay costs.
As if that wasn't bad enough, independently, the above action is toast since Patrick apparently filed it while concealing his status as an undischarged bankrupt, which disqualifies him from filing any such motion:

Once again, Patrick's filing above is dead on arrival, but it's also possible that Patrick could face criminal charges for knowingly filing an action he was not allowed to file. But, yes, it gets worse.
Apparently, there is the distinct possibility that Patrick, given his long and pathetic history of filing worthless applications, will be declared by the Court as a "vexatious litigant," which means he would not be allowed to file further applications unless he first got the permission of the Court. Now, this seems like overkill given that his status as an undischarged bankrupt already prevents him from doing that, but it would be amusing to be able to write "trustee-less undischarged bankrupt and vexatious litigant Patrick Ross" from time to time.
I might have to set up a hot key.
P.S. If you want howlingly funny evidence of Patrick's vexatious incompetence, well, you'll have to check back tomorrow, as I will have a never-before-told story of Patrick's legalistic cluelessness.
You'll want to read it.
Posted by CC at 4:38 AM

If the period to serve is 8 weeks, then Patrick has until somewhere in mid-December to serve the papers.

... not to be a nit-pick here, but it's only been 6 days since he filed the statement of claim.

MgS: Doesn't work that way; the clock starts ticking when you either learned of the alleged defamation, or when you *should* have learned of it if you had been exercising due diligence. In other words, all these weeks of his bloviating about suing counted against him.

MgS: Patrick didn't properly serve me a notice of libel. I received nothing from him thus far.

He made no motion for substitution of service, so posting it to Twitter meant nothing. He thinks it does because of a ruling in Ontario, but that ruling isn't binding in Alberta.

Once again Patrick is trying to make the law contort the way he wants it to work, not how it actually works.

This SoC he's filed isn't worth the paper it was printed on. It's dead before I have to actually do anything.

I am speculating here, but I'm thinking that if Patrick tried to backpedal and serve a Notice of Libel, he would end up in even more trouble.

Right now, when he's told that he has absolutely no right to initiate a legal action, he can plead ignorance (not a hard sell for that boy), and insist he had no idea and try to get out of trouble.

At this point, however, there is ample evidence that he is aware of what numerous people have published about his situation, so there is no way he can just say, "Oh, gosh, I had no idea!" Now he knows, so filing yet another legal application with full knowledge that he has no right to do so would almost certainly get him in even deeper shit.

I've spoken to the clerk in Grande Prairie's Queen's Bench and had Patrick informed them of his true bankruptcy status, he would not have been able to file without attaching his trustee to it.

In speaking with counsel and the clerk here at the Edmonton Queen's Bench, they told me the same but also clarified that Twitter is not sufficient for service of a notice of libel or his SoC. Whatever he's clinging to with a ruling in Ontario in your case (which was a horrible ruling) doesn't apply here. Alberta's court is under no obligation to uphold that ruling.

My motion to dismiss will ask three questions:

1. Was his service via Twitter legal. I can't find a single legal case where it was allowed without a motion of substitution of service. Posting to people's Facebook pages is the usual substitution method, followed by email with confirmations of sending, receiving, and opening of said email. Again, those were allowed after obtaining a substitution of service in court.

2. How was he allowed to file as an undischarged bankrupt that has no Trustee supporting his case? He knows he can't, but again he's holding on to a very specific piece of language that thinks makes his case, but it doesn't. Again, I haven't been able to find a single case where an undischarged bankrupt individual was allowed to continue their suit without a trustee. Normally there's still a trustee attached to a person, but Patrick's non-compliance with his doesn't negate the requirement. If anything it will show the court he doesn't honestly engage.

3. He's filed against my business, which has done nothing wrong. It made no statements. The only reason it's attached to this case is because Patrick used it when he filled out an online form using my business email. Honestly, if Patrick used any of my other email addresses, and he knows 2 of them, I wouldn't have cared. I'm used to his methods of harassment, and it's how I immediately focused in on him. He used the same tactics against others who posted online, and used the same on me before he went for a restraining order on me as he chirped literally the night before the hearing. He looked like a fool in court. We might have hand mutual restraining orders placed on us (I did threaten to kick the living crap out him, but tough guys always run to court for help), but I'm the one who left the courtroom literally cheering. People laughed at Patrick in court when I told the Justice about Robert's lawsuit and Greg Burton, the person Patrick previously impersonated.

Those are the three reasons, and arguments I'll me making. Based on the above, with my mitts filled with all the rulings against him in Robert's case, I'll be also trying to get him labelled a vexatious litigant. Now, some think that's overkill, but my goal is to ensure he can't do this to others, but if he does try, he'll be required to have counsel to argue for leave to file a case.

If I'm awarded costs, I'll be stepping aside to let Robert do his thing first. He's been owed for far too long, and anything Patrick owns should be his.

Bitcoin his 81K this morning. I'm doing more than fine :)

RogueNerdOne: I have clarified with legal experts here that the idiotic anti-SLAPP against me here in Ontario carries no precedential weight whatsoever. Anyone trying to use it as legal precedent is in for a very unpleasant surprise.

Mail has come and gone for another day and still nothing from Patrick.

Not even a card to go pick up a registered letter.

Interesting - I did not know that - I usually assume that the clock starts ticking relative to the date of filing.

If that's the case, then he's well and truly screwed himself ... although that seems to be about par for the course for Patrick.

MgS: I think you can safely assume I understand Canadian defamation law pretty well by now. :-)

That's the larger error here other than his life.