Learned well from his grifty master, Keean has.

Once upon a time, I explained one of the dead giveaways of an obvious grift (courtesy of the Urban Dictionary):

The highlighted portion emphasizes one of the most overused strategies of the grift -- the claim of a sudden emergency wherein one needs an assload of money to stay on the air (see: "Ezra Levant", as in my earlier piece). Whereupon along comes right-wing hack and ex-Rebeler Keean "Tomorrow Belongs To Me" Bexte ... 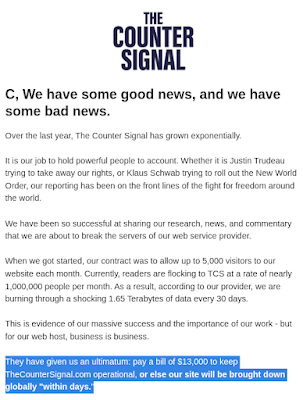 Yes, send money! Now! Right now, or Bexte might go off the air for *checks notes* violating the terms of his contract.

It does make one wonder, though, how someone who claims an audience of a million readers a month can't find a mere $13,000, given that he panhandles even more relentlessly than Sheila Gunn Reid. Sounds like Bexte is even worse with money management than Patrick Ross, and I do not make that suggestion lightly.

P.S. I am curious as to how having a sizable readership equates to chewing up one and a half terabytes of disk space a month. If people are simply reading your swill, why would that result in such a ginormous use of disk space, unless all that space is being used to track readers for the purpose of, who knows, selling their personal information to third parties? Because people simply reading stuff doesn't explain it, does it? And if Bexte is already heavily into data mining for the purpose of monetizing his readership, why the fuck is he begging for cash?

P.P.S. From that earlier piece, one is reminded of perpetual panhandler Ezra Levant shrieking desperately for at least $150K to sue PayPal:

Whatever became of that legal action, and all the dosh that was sucked up for it? Again, so many questions.

"We have some good news, and we have some bad news. Our web host has given us an ultimatum; pay a bill of $13,000 to keep the Countersignal operational, or else the site will be brought down globally within day."

And the bad news?

Wait, who gets restricted to 5000 visitors a month at a web host, and why would you limit yourself so?

I host websites that push 10-15K visitors daily and they don't pay any more than the folks that use 500 a month.

I have 15TB allotted per server and 8 customers/server. A site could use 20TB/year and I'd still only charge $139.00/year + domain costs.

I'm guaranteeing this is Nationbuilder and he hasn't paid his bill in a LONG time. $13K? Sounds like someone wants to take that all expenses paid vacation to the land of the whiteys where not a single person of color exists.

Racist evil villain, former white nationalist website operator, and all around bleached asshole is scamming his audience like Ezra does. It's always an emergency and it always gets covered.

Conservatives in this country are dying for likeminded news like the Borg sought out Enterprise Captains for their weird sex parties.