Chronicles of Twatrick: Ah, the irony.

*Sigh* ... I am simply too weak to resist responding to this recent idiocy from Lloydminster's Lord Baron Twatrick von Loadenhosen: 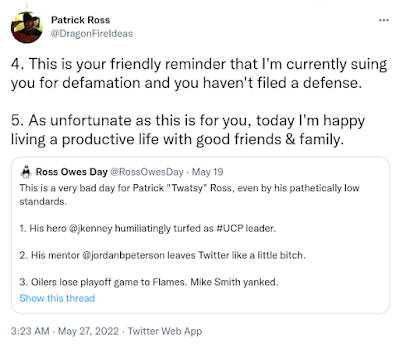 First, Patrick is not suing that person/account as Patrick has no idea who's behind that account and therefore could not possibly have effected a proper and legal service that requires a response. That's how the law works.

Finally, it's unlikely that someone who is an undischarged bankrupt and owes me over $100K (and is reportedly using his father's credit card when out on the town) is "happy living a productive life with good friends & family," as I have it on moderately reliable authority that no one in that dysfunctional family even likes Patrick anymore, given the financial mess and chaos he's dragged them into.

But, hey, enjoy your fantasies, bucko.

BONUS TRACK: It's hard to believe the relentless gaseous bloviating coming out of Lloydminster these days, as Patrick continues to insist he's going to sue the living shit out of ... well, everybody:

However, I can assure one and all that the above is never, ever, ever going to happen for a number of reasons, a few of which I will list here.

First, given Patrick's appalling level of indebtedness to me (along with his history of refusing to obey court orders or pay cost awards until forced), any sane judge will insist that Patrick put up a whacking big chunk of security. Whereupon I will swoop in and simply take it as part of my collection proceedings.

Second, I know (through the OSB) that the legal system is now fully aware of Patrick's status as an undischarged bankrupt without a trustee, and Patrick will absolutely not be allowed to file any further legal actions. Period.

The best part, though, is that the evidence is overwhelming that Patrick is now back in Grande Prairie, and even if he somehow found a way to file an action, he would absolutely have to list -- as his address for legal service -- his address in Grande Prairie, and not a bogus address like Lloydminster where he currently does not reside. And the instant he did that, I would make sure collection agents showed up at that address for future collection (especially if he had to reveal the identity of his employer).

Let's face it -- with one minor exception, Patrick has represented himself in this action related to me since 2010, and the end results show pretty clearly that he doesn't have the slightest fucking idea how the law works. So I don't think anyone has anything to worry about. But if Patrick wants to file something, I would be more than happy to take his contact information to expedite the collection process.

No one knows you're a dog on the internet.

Is Twatsy even allowed to sue people? I thought he was declared a vexatious litigant, or his status as an undischarged bankrupt disallows him from suing people?

Anon: You would be correct in assuming that Patrick has no legal standing to file actions like this, so his constant harping about all the people he is suing is simply fiction.

Oilers beat the Flames. If this went PR's way, no doubt everything else will go his way by sheer force of his will, just as he willed the Oilers to win. You know, Green Lantern style

"6. You, meanwhile, are very clearly an extremely unhappy person living an extremely empty life. I actually feel very badly for you.

But my sympathies have their limits, and I will seek & receive legal redress for all of your vicious little lies."

Bankruptcy-wise, are there legal issues if Twatrick is using Ken's credit card? Like, shouldn't Ken's purchases be counted as "After Acquired Assets" or something like that? Could this be perceived as some sort of a conspiracy to conceal assets and evade lawful seizure of assets?

I'll guess at some point, you will be examining the financial records of one Ken Ross, of Lloydminster, Saskatchewan?

Augray: That will definitely be one of the questions on the list when I force Ken to sit for questioning under oath when the time comes. It would be most entertaining if I can have him charged with aiding/abetting bankruptcy fraud if this is the game they're playing.