There is a level of stupid here ... 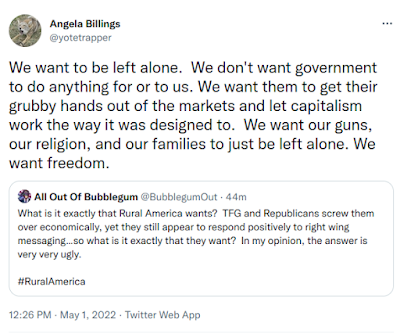 Sounds reasonable. Cut off all agricultural subsidies. Then let capitalists buy up all the family farms and apply free market principles to the wages of the remaining sharecroppers. As they say, freedom's just another word for nothing left to lose.

"Give us more money and mind your own business."
The rural motto - not only on the USA.

Nobody is stopping them from believing in their stupid religions.

Making it easy for criminals and deranged people to get guns has been disastrous.

The silly thing is that both Republicans and Democrats are screwing people over at the behest of the oligarchy. But liberals continue to believe in the lies of scumbags like Obama, Biden and the Clintons.

I've said it before and I'll say it again: Nobody ever said they were smart.