The stupidity of Annette Lewis: Once again, I called it.

It's tiring being right about everything all the time, but it's a cross I'm willing to bear because I love you all. Well, OK, not all of you but you get the idea.
Back here, I wrote about the burning stupid of one Annette Lewis, who insisted that she would rather die of a terminal lung condition than get vaxxed, and insisted that she had a fundamental Charter right to tell doctors how to do their jobs. Quite properly, Court of Queens Bench of Alberta told her to piss off, as did the Court of Appeal.
(SIDE NOTE: The relentless, hysterical hyperbole from Canada's wanker-sphere insists on provocative headlines like, "Canada's courts condemn unfortunate freedom-loving grandmother to death," or trash like that, when the simple fact is that scarce organ transplants are allocated to people who are willing to play by the rules to maximize chances of success and recovery, and if Lewis refuses to play by those rules, well, tough shit. Onward.)
To absolutely no one's surprise, opportunistic ghouls like Keean "Tomorrow Belongs to Me" Bexte and the hilariously-misnamed Justice Centre for Constitutional Freedoms are totally stoked to be promoting Lewis to continue her doomed quest: 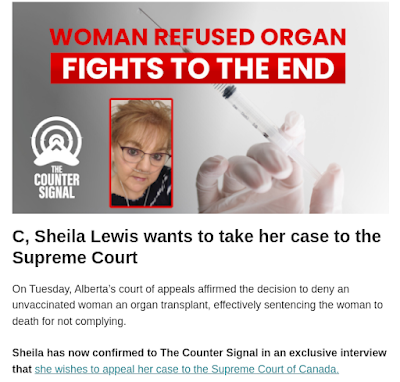 Here's the most ghoulish part of the whole thing, as reported by Nazi memorabilia expert Bexte:

However, Lewis is still determining if she’ll be able to raise enough money to take her case to the Supreme Court. Moreover, she doesn’t know how much longer her failing organ will hold up.

One can almost imagine both Bexte and the ghouls at JCCF pleading with Lewis, "Yes, we know you could kick off any day now, but could you hang on just long enough for our next massive fundraiser? Oh, and if it's not a bother, can you not put a crimp in our data mining petitions?" 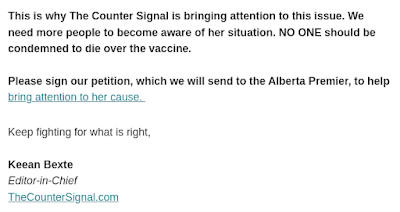 Sure, Lewis could kick off any day now, but as long as the coffers at JCCF have been juiced adequately by this, then mission accomplished, amirite?
AFTERSNARK: It is amusing to see the misrepresentation by the JCCF on the topic of expert witnesses. Here's the JCCF: 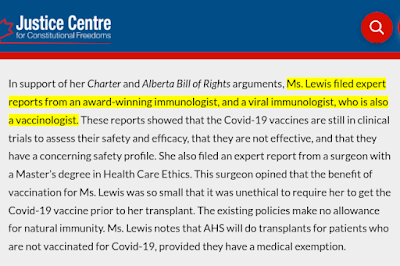 On the other hand, here's the finding of the Court: 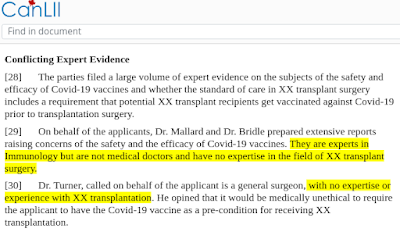 Apparently, JCCF wanted to call Jamie Sale and Theo Fleury as medical authorities but were (sadly) talked out of it.
P.S. Perhaps this snippet near the end of the Court of Appeal ruling cuts through the nonsense:

"In the circumstances of this appeal, while Ms Lewis has the right to refuse to be vaccinated against COVID-19, the Charter cannot remediate the consequences of her choice."

Doctors overseeing this decision should announce that, sure, they'll put Lewis on the list, and there's an opening in 34 months. Problem probably solved.

They forgot to mention that this is all somehow Trudeau's fault.

Has the JCCF ever won a case?