The illiteracy ... it burns. 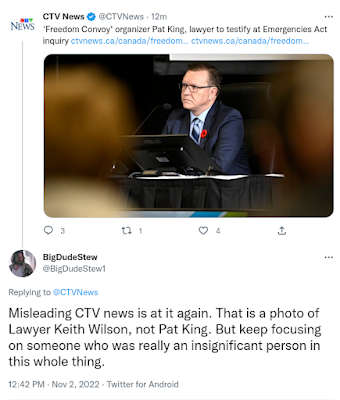 The more testimony I hear the more I wonder if Wilson/JCCF were pulling most of the strings most of the time. He certainly advised Lich a lot and he pronounced her to be the leader which she was not. But she is more presentable to media and as a court witness than most of the real leaders: Barber and Belton who started the convoy idea, King who was an organizer and popular with the truckers on the street to the end no matter how the leaders try to disavow him now, Bauder with his loony MOU, Marazzo, Dichter, etc.

Dichter thought the lawyers Wilson and Chipiuk were bringing politics into it more and resented them. Wilson also brought in Dean French to negotiate with the City, getting his name from Peckford.