Satire or parody? You be the judge. 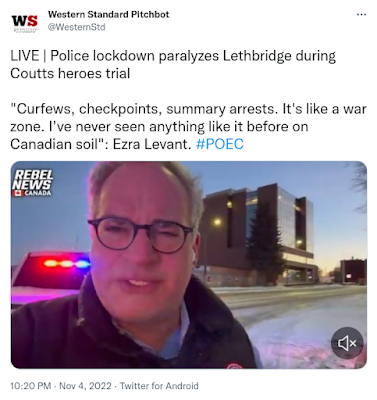 There's a stage of cognitive and emotional development in human children that occurs shortly after they grasp the notion of "qualification" - the concept that an attribute can be linked with an object or event (big apple, bad mommy, nice puppy, etc.) The age varies from individual to individual, of course, but generally occurs between the ages of 3 and 4. This is quickly followed by a (mercifully brief) stage of "hyperbolization", in which the child will amplify everything to its absolute maximum (you're the WORST MOMMMY EVER!!!). This behaviour is a normal stage of emotional growth, and usually disappears between ages 4 and 6.
How lucky for Ezra that he has found a community of readers mired at exactly the same stunted stage of cognitive growth as himself.

Show him the video Emilie Taman played at POEC yesterday. Maybe people should play it at him and his employees every time they open their mouths.

Are these the 'heroes' on trial for plotting to kill RCMP officers?

No, these are three organizers of the Coutts blockade. They were not arrested at the time, and in September they were each charged with mischief over $5000. One organizer, Marco Van Huigenbos, will be a witness at POEC, probably on Tuesday.

Marco and probably the others share the convoyers' belief that the four charged with conspiracy to murder are really political prisoners who were framed by police with planted weapons. Some of the idiots want them released on bail.

My favourite part of that story so far is that the undercover cops were women who fooled the four conspirators.