Yes, it's a day early, but there is some entertainment value in that Lloydminster's favourite undischarged bankrupt and village idiot Patrick Ross is publicly and openly threatening to slander me for (*checks notes*) reviving my previous fundraiser to buy wool socks for homeless shelters around Ottawa. I wish I could say I'm making this up but ... no.
In any event, another month, another $500 or so tacked on to whatever Patrick owes me these days:

It's been 15 months since the above ruling so you can do the math.
On the legal side and with respect to Patrick's monumentally meritless multi-multi-million dollar lawsuits against multiple defendants, my hearing to have Patrick and his stupidity kicked to the curb is scheduled for Friday, December 2, before Justice in Chambers at the Grande Prairie courthouse (I will be attending virtually). 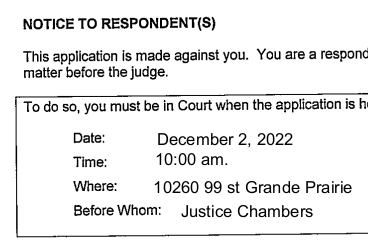 Patrick, on the other hand, has managed to annoy the sweet fuck out of the people at the GP courthouse by filing to amend his original Statement of Claim (hearing to have been held last November 4), only for Patrick to call the courthouse minutes before the hearing was to start, beg off due to "illness," then brag later that very day about what an awesome iron-pumping day he had at the gym. So they're already pretty fucking pissed with Patrick, and we'll see how that plays out in two weeks. (That Patrick apparently blew off that court date because he knew I had a process server waiting for him there is not going to win him any points, either. Again, we'll see what sort of reception he gets when/if he appears. Calling up at the last minute and feigning sickness a second time would be a monumentally stupid thing to do so I guess we can assume that's what will happen.)
At this point, I think I count five separate legal actions Patrick is scrambling to keep up with, and that doesn't count the ones I will be filing once the above dumbassitude is out of the way. But no worries ... Patrick is an incredibly talented and knowledgeable self-represented litigant.
Just ask him.
P.S. Yes, you're invited to dump some cash into that fundraiser to buy high-quality wool socks for the less fortunate around Ottawa. We all have our pet projects -- that's mine.
P.P.S. It's not clear how Patrick will continue filing and serving idiotically meritless actions if he's too terrified to show up at the courthouse, knowing the shitstorm that awaits him there. I will, this weekend, be writing a lengthy letter to the Justice in Chambers at the Grande Prairie Courthouse, laying out in nad-grinding detail the games that Patrick has been playing lately, in particular his last-minute ducking of his own November 4 hearing in order to hit the gym. I hear judges really, really, really hate that kind of shit.
RUH ROH ... Someone points out that Patrick just published some very unwise tweets, to wit:

That would be Patrick, clearly suggesting that Skinner is a "co-defendant" in that same action (despite not being named in the list of defendants). So, which is it? Is Skinner a co-defendant or not? Patrick really needs to pick a lane. And, yes, this brand new and glaring contradiction will be part of my weekend letter to the Justice in Chambers at the Grande Prairie Courthouse.
Oh, and it's worth noting that, once again, Patrick is bragging about how he will absolutely, no problem, hands down win this upcoming December 2 hearing, despite not having won a single legal action against anyone ever in the history of the universe. But this time for sure.
Posted by CC at 4:32 AM

How many parties is Patrick now actively evading? I count the Saskatchewan sheriffs, the federal Office of the Superintendent of Bankruptcy, your process server and now the people at the Grande Prairie courthouse. Have I missed anyone?

Hard to tell ... for someone that consistently mouthy on social media, Patrick spends an inordinate amount of time not answering emails, screening his calls, and refusing to tell process servers where he can reliably be found. Not much of a life.

How long until Rosshole blames his behaviour on mental illness?


For all the years that I've seen this turd online he just keep on with the same old...
Rather typical of all Conservative and a testament to the failure of our mental health system.

Ya know, Twatrick tweeting all this stuff publicly is exactly the reason why most lawyers tell you not to post stuff about your case on social media. He'd know that if he had one. It's no wonder "Boy Wonder"'s lost every single legal action he's ever taken.

Anon @ 1:49 PM: It's not that Patrick tweets stuff about his cases, it's that he tweets the stupidest and most damaging things. He has no idea how much of what he's blathered on about lately is going to end up before the Justice in Chambers come December 2. This is why, despite his relentless blar-har-haring, he's never won a single action. Not one. Not even close.

Well yeah, that's basically what I meant lol it's the damaging stuff he tweets