You keep using that word "immense" ... 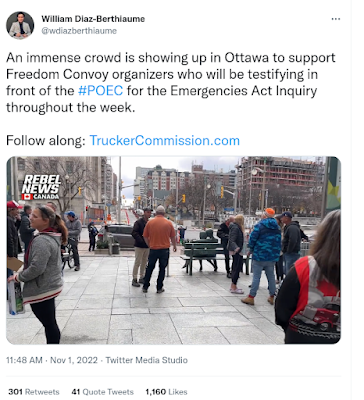 P.S. Hang on, what's this? Once upon a time, Rebel News was pandering for cash with the clear implication that 15 Rebel "journalists" would be on-site at the EA Inquiry doing what they do -- annoying people and lying about what happened: 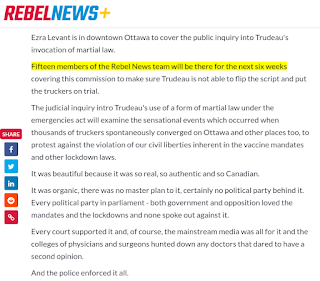 Maybe it's just me but when someone fundraises based on the assurance that fifteen Rebelers will be in Ottawa "for the next six weeks," then it seems safe to conclude that there will be 15 Rebelers in Ottawa for the entirety of that six weeks.
And not this: 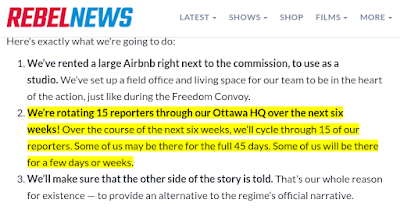 Again, perhaps it's just me, but I think there's a palpable difference between "15 people will be there the entire six weeks" and "A total of 15 different people will rotate in and out for six weeks." Oh, well, whatever separates the rubes from their rubles, I guess.
Posted by CC at 6:05 AM

Rebel will next be arguing that the two figures on the The Secret Bench of Knowledge sculpture should be counted amongst the supporters.

William Diaz-Berthiaume, Editor & Reporter at RebelNewsOnline, questioned Marazzo yesterday for all of 2 minutes and was announced as a representative of The Democracy Fund.
He asked Marazzo a how-do-you-feel question and sat down.

One can understand their issue when it comes to counting things. I mean, when the convoy was making its way to Ottawa throughout the month of January, there were many posts stating that 50,000 trucks were on their way. Of course, anyone who has at least two brain cells to rub together (which itself disqualifies the average CPC/PPC supporter) would know that such a number would literally stretch over several provinces. For the record, the knobs who came this way (Winnipeg) were in and out in less than 24 hours, including a stopover just outside the city in Headingly. Unless they picked up several ten of thousands of trucks between Winnipeg and Ottawa, they were a might bit off on their estimate.

So yeah, when they see a crowd of maybe a dozen people who support the Fuckers' Bridage, it looks to them like 12,000 people. Makes you wonder what other things they have to overstate the size of for seemingly no reason.

By the way, anyone see the testimony of the guy who wrote the Memorandum of Undetstanding to overthrow the government? Let's just say he was about as coherent as the MoU that he wrote.

JCCF lawyer currently reading out a letter on behalf of co-participant The Democracy Fund bc they are not present today.

Go easy on Ezzie, he just had a mortgage for Rebel turned down, heh, heh! How nice that he has the support of Nazi Paul Fromm.