I can't wait to see what Ezra does next.

Given that Rebel News' Ezra Levant bragged excitedly about being a guest on Fox News' "Tucker Carlson" even as Carlson was promoting suntanning one's testicles to boost testosterone, it remains to be seen how anti-LGBTQ Ezra gets down with GOP congresscritter Madison Cawthorn sporting a push-up bra and "Hello, Kitty" thong underwear: 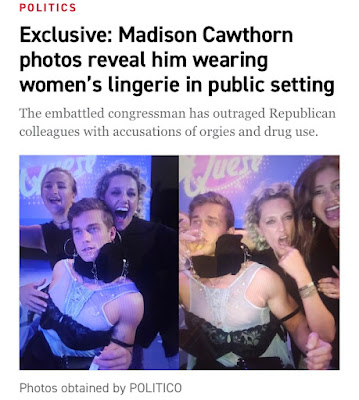 I'm sure David Menzies figures it's just another day at the office. Meanwhile, Sheila Gunn Reid is pissed that Cawthorn looks better in a Maidenform than she does.

Who was it who stuck a hotdog up his bum as part of his show?

I think you're referring to Gavin Mcinnes, who stuffed a butt plug up his rear while on his show to "own the libs".

Accuse others of what he is doing? Standard operating procedure.