If Keean Bexte were any more dishonest, ...

... he'd be Sheila Gunn Reid. Here's Bexte, waxing indignant over an alleged overreach by Canadian border officials, wherein Bexte clearly suggests that said officials will have unfettered freedom to snoop through your smartphone or whatever: 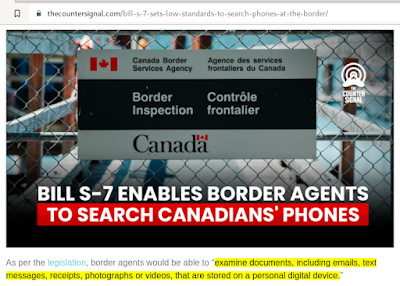 Note well the quote from Bexte, wherein he clearly implies that the portion of the legislation he is quoting ends, well, there. End of sentence. Period.

Of course, with Bexte, there's always more to it than that, as we can see that the sentence does not in fact end there, but continues on to add significant and important qualifiers: 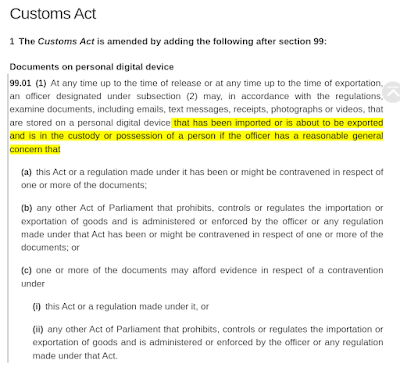 In the end, while you're free to argue the merits of Bill S-7, you should at least agree that proper journalism demands you quote with accuracy and integrity, something I suspect Keean never picked up while learning at the knee of the master.

Lawyers and executives have been carrying "clean" laptops across borders for years, then logging into the firm's portal to retrieve documents on arrival. Customs, especially US Customs, have always had a very broad right to search and courts have ruled that people have virtually no expectation of privacy at the border. If you're carrying dick pix on your phone, you can expect them to become the property of Uncle Sam when you cross the border. Same goes when you come home. And if you're in the States, remember that the Border Patrol's jurisdiction extends 100 miles from the border, meaning that they have the right to stop and search you in most major US cities and there ain't sweet Fanny Annie you can do about it.

Anon: I'm not arguing either for or against the legislation; I am taking the position that, regardless what you think of it, it's sleazy and irresponsible to misrepresent or manipulate quotes to score political points. There's enough about the legislation to criticize without having to fabricate stuff.