Right-wing media outlet that defends appalling, decades-long repression and isolation and deprivation of Palestinians by the openly apartheid state of Israel will now sob inconsolably over the unimaginable horrors of a whole 51 days of imprisonment of a man who *checks notes* continues to break the law: 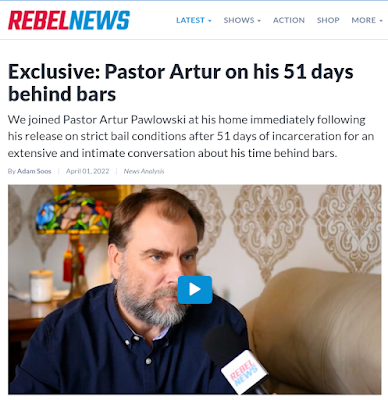 Art is skating pretty close to a bail breach. His bail conditions include house curfew from 7 p.m. to 7 a.m. and house arrest with a church visit once a week. He is also allowed visitors while under house arrest and can post on social media. He is prohibited from attending protests of any kind or any meeting with the public.

The intent is to stop him from inciting others, which is one of his charges. While technically not breaching his bail, Rebel is giving Art a platform to do exactly that. Frankly, I'm surprised he was allowed to continue shitposting on social media.

Anon: I will speculate that that is *exactly* what Rebel News is going for here -- having Pastor Art charged with violating his bail conditions as the basis for another spate of frantic fundraising.

Think about it -- the delight in shrieking about how the state is violating Pastor Art's fundamental right to free speech, and now he's back in custody, and we need to raise another $4.38 million to petition the court for his immediate release from Trudeau's dictatorial RCMP storm troopers or whatever, and sign this petition to show your outrage, and send money, and so on and on and tediously on.

If Pastor Art is indeed charged with a breach of bail conditions and re-arrested, let's see how accurate I am in predicting how quickly Ezra Levant will monetize the shit out of that.